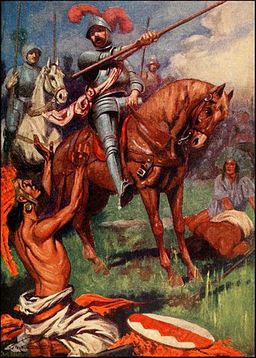 In the 16th century when the Spanish Conquistadors conquered Mexico they began to hear rumors of a fabulous priest-king who was said to cover his body with gold dust. The conquistadors called him El-Dorado or the Gilded King, and the Golden One.  The city he ruled over was said to be paved with gold and held unimaginable treasures.

The Zipa and the Zaque

When the conquistadors explored what is now Columbia they found the Muisca people who were organized into the Muisca Confederation.  This confederation had two rulers; the Zipa and the Zaque.   The Zipa ruled over the southern part of the confederation that was then called Bacatá and now known as Bogota and during the time of the Spanish conquest the Zipa held ascendency over the Zaque.

The Zaque ruled over the northern part of the confederation.  These were positions of tremendous prestige, authority and power and they were held in great honor by the people.  Elaborate ceremonies surrounded them and were part of their duties to participate in and perform.

The Zipa was held in such high esteem that even members of the Muisca nobility would not dare to look him in the face.  Although the position was inherited it was not from a patrilineal line.  The new ruler would come from the oldest son of the oldest sister of the previous Zipa so he would be the nephew.   Although there were some exceptions to this and the people had some say in the matter, but usually only to give their consent to the successor at the ceremony on Lake Guatavita.

One of the most important tasks of the Zipa was to offer the gods gold and this was done with great ceremony at Lake Guatavita the sacred lake of the Muisca.  In a ceremony on barge on Lake Guatavita the Zipa would be covered in mud and then gold dust sprinkled over him and then floated out to the middle of the lake.  While his people watched from the shore he would dive in the water washing himself clean of mud and gold dust. His attendants then threw gold and silver objects and precious stones into the water for the gods and the people would roar their approval from the shore. 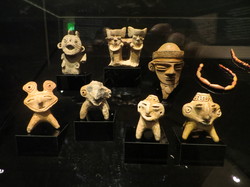 The conquistadors had heard rumour of this ritual of the Muisca people who occupied the Cundinamarca and Boyacá areas of Colombia and though they must possess a rich source of gold and immense wealth.   But the Muisca had a different way of valuing gold.  For them it was what they called the Mnya, which was the golden coloring or sheen that represented the energy that radiated from the trinity of  Chiminigagua, which was the very creative power of every thing in existence.  In the mythology of the Muisca people Chiminigagu was one of creators of the universe, along with  Bachué, Bochica,  Cuza, Chibchacum and Nemcatacoa.

The beginning of the world

In Muisca mythology the world began with Chimi, which was the pulp and was the first material object to manifest in the world.  The embryos of stone, land and the stars were incubated in the inner regions of tomsa.  When tomsa became full the seeds of the earth manifested and what was left over was thrown out creating the Milky Way.  The elements were given to the gods.  The sun was given to Sua. while Chia received the moon. The Earth was give smoke and clouds. None of these could evolve and grow until Mnya, the energy of gold, became one with Chimi, the pulp, creating the creative force the Muisca called Chimini.  It was chimini that was the cause of all the seeds to germinate and grow.

So while the Muisca, Aztecs, Incas and other indigenous American people may have appeared to have possessed great wealth to the conquistadors they had an entirely different philosophy towards gold.  For example, the Aztecs although possessing many gold items of great value to Europeans regarded gold as a waste product of the gods, or “god excrement”.  After the death of  Moctezuma II most of their gold was taken and transported to Spain.   The indigenous people saw more worth and utility in other minerals and metals such as obsidian and slate. 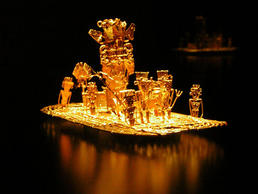 Representation of the initiation of the new Zipa in the lake of Guatavita - Andrew Bertram - World66 - CC BY-SA 1.0
Gold fever

Nevertheless the conquistadors and other Europeans were very much motivated by lust for gold.  Francisco Pizarro leading an army of  conquistadors invaded Peru in search of it.  Although they were small numbers in number they defeated the Incas, thanks to possessing guns and gunpowder, better steel in their swords and armour, disease and the use of all manner of murder deceit and deception. Nevertheless they did not find El Dorado.  They did find some gold but not enough to satisfy their greed and they began to wonder where the origin of the Inca gold could be found.  Pizarro was assassinated in 1541 so the lust for gold did him no good but it still lived on in the conquistadors.

The fever for gold caused the legend of the Gilded King to become convoluted in the minds of people greedy for riches. Instead of a priest-king performing a ritual,  El Dorado became a lost city of riches where the streets were paved with gold, hidden somewhere in the vast unknown jungles of South America.  It grew in their minds to a fabulous country full of gold, silver and wonderful jewels and treasure.   Eventually it grew into a fantasy that the conquistadors, adventurers and explorers could not resist.  Many men from around the world lost fortunes and their lives in search of it. 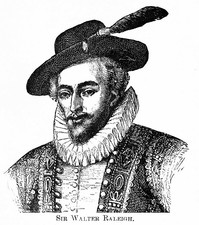 The rumor of a lost city of gold reached many adventurers across the sea in Europe.   From England Sir Walter Raleigh came into possession of an old map which he believed showed the whereabouts of El Dorado.  He set out from England in 1595 with the aim of exploring the Lake Parime area of Guyana which is where he believed El Dorado to be situated.

His enthusiasm was fired by an account of Juan Martinez who was thought to be Juan Martin de Albujar.  He who had traveled with the expedition of Pedro de Silva who in 1570 had explored the area, but had been captured by Caribs in the region of the Lower Orinoco.

According to Martinez while he was in the hands of the Caribs they had blindfolded him and taken him to a fabulous golden city where he had been entertained by its residents and had seen many wonders there.  He had been released but could not either remember the way back from the city or could not find the way to return.

Raleigh's expedition had set a number of goals as well as finding the lost city, but he genuinely believed he had a good chance despite the  difficulties it entailed.  He believed the lost city was actually Manõa an Indian city.

He also was determined to establish a base on the South American mainland that could be used to challenge the Spanish dominance of the region.  Another goal was to establish an English settlement in Guyana to challenge the monopoly the Spanish had in trading with the native people.  He never found El Dorado but did find gold along banks of the rivers and in native villages before he returned to England.

But these finds strengthened his resolve and the idea that the native people of Guyana had plentiful  source of gold.  In 1617, accompanied by his son, Watt Raleigh he led a second expedition to the New World determined to find the fabled city of El Dorado.  But this expedition would prove to be a disaster. Raleigh was now an old man and remained at the expedition's base camp on the island of Trinidad.  In a battle with Spaniards his son was killed.  When Raleigh returned to England, King James was furious that he had not followed orders to avoid conflict with the Spanish in the New World.  Possibly to appease the Spanish the King sentenced him to death and he was beheaded in 1618.

Since its conception many brave and intelligent men like Raleigh have looked for El Dorado and not found it. El Dorado has become a term that is used to describe the achievement of the ultimate prize or goal. To reach El Dorado has become a figure of speech for reaching a state of a desired achievement, or to finding something that is greatly desired, but never found, in a similar way one might seek the Holy Grail.

The quest for El Dorado

The quest for El Dorado has lasted for centuries and to this day some people still believe a lost city of riches lies in the jungle waiting to be discovered.  New archaeological  discoveries in the South American jungles have revealed abandoned cities and structures from unknown civilizations.    Recent archaeological research shows that at one time great swathes of the Amazonian forest was cultivated and there is evidence of great towns that seemed to have been overcome by the jungle.  Archaeologists think these settlements were home to thousands of people but the coming of Europeans brought war and disease decimating the population.

The lost city of El Dorado has never been found because it never existed as a city or country.  El Dorado was a person, the Zipa, who covered himself in gold dust to perform a ritual.  The gold dust he covered himself in did not mean the same to him and his people as it did to Europeans who coveted the substance. It was not the monetary value that made it special but its color, sheen, or energy that was seen as sacred but they did not attach the value to it in the same way Europeans did.

There may well be lost cities hidden in the jungles of South America and maybe they do hold treasure and gold but they will not be El Dorado because El Dorado was a man they called the Zipa, the Golden One, and it was his world that was lost with the arrival of the Europeans.
© 05/04/2015 zteve t evans
References and Attributions