By zteve t evans
Swan Maidens are peculiar creatures.  In many ways they are the embodiment of natural female energy:  pure, wild and natural and very beautiful.    They have the power to change their shape from a beautiful pure white swan into a beautiful woman.  In folktales, men who witness this transformation are invariably struck by a spell causing them to fall in love and they will do anything to win and keep this love, but the Swan Maiden will eventually challenge and test that love.   If the man passes he wins the Swan Maiden and happiness in life, if he fails he gets death.   This is a version of a folktale that originated in Sweden and was recorded by Herman Hofberg. 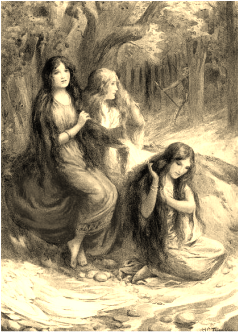 There was once a young man who often went out on his own hunting.  On one particular occasion which happened to be on a Thursday evening, he espied three magnificent white swans flying directly overhead.  From their altitude and manner of flight he guessed they were preparing to land on the water of a nearby strand of a river.  He had never seen such magnificent swans before and decided to follow them.   As he had suspected that was where they landed and to his absolute astonishment took off their gleaming white feathery skins revealing three beautiful maidens underneath.

As each finished undressing they strode to the bank and ran  into the water.  They laughed and played in the water for a while and then returned to the bank and replaced their feathery garb becoming swans again.  They then took off into the air flying back in the direction they had come from.

The hunter's eye had fallen on the youngest who he thought was the fairest.  Her image burned in his mind day and night and he could not get her out of his thoughts and fell into a depression.  He stopped going hunting and began to lose interest in everything and spent the days moping and daydreaming.  During the night her image burned bright in his dreams.  His mother noticed his melancholia and asked him what was the matter.

To catch a Swan Maiden

He told her about his experience with the Swan Maidens and told he could not love any other and only the young swan maiden could satisfy his desire for love now. His mother told him that it was possible.  She told him to go at sunset on Thursday evening to the place he had seen the swan maidens and hide himself in the undergrowth and await their arrival. When they arrived and began undressing he must watch where the youngest laid her garb and then creep forward and take it and hide.

So the young hunter followed his mother's advice and finding a good hiding place awaited the coming of the swan maidens.  As the sun was setting he heard the sound of powerful wings and three magnificent white swans flew out of the sunset and glided down to settle on the water. They then swam to the beach where they had disrobed before.

Once again as they took off the outer feathery garb they were transformed into three beautiful maidens who skipped across the sandy beach to plunge laughing and singing into the water.  The hunter's heart skipped as he saw  among them the youngest and fairest who had captured his heart.   Peeking out of his hiding place he  noted where she had placed her feathery outer garments and crept stealthily forward and took them and returned to his hiding place.  There he waited silently and patiently to see what would happen.

Just before sunrise the three swan maidens emerged laughing and singing from the water.   Two of them began to dress quickly telling the youngest to hurry reminding her they had to be gone by sunrise.  The youngest was crying and running up and down the strand frantically searching for her clothes.  She cried to her sisters to wait but they told her they could not as the sun was coming and flew off powerfully the way they had come leaving her behind.

When they gone the hunter stepped forward with the maidens feathery clothing in his hand. When she saw him she fell to her knees begging him to give her back her clothes. He refused and instead covered her with his own cloak and carried her home with him.

The hunter married the Swan Maiden and the two lived happily as man and wife for many years. One Thursday evening the couple were talking and he told her how he had won her.  She asked him if she could once again see her former feathery garments and to hold them again.  The hunter agreed but as soon as he placed the dress in her hands she turned into a magnificent white swan and flew threw an open window into the sky and off into the sunset.

The hunter was shocked and astonished at the rapid transformation of his wife.  He ran after her but she was gone and he finally dropped to the ground in grief and exhaustion from his efforts. Without his wife the hunter fell into a depression and would not eat.  After a  year and a day he passed away and was laid to rest in the local churchyard one Thursday evening.

The hunter did not take up the challenge and failed the test.  Instead of going after her, tracking her down and fighting for her, as happened in the story of the Hunter and the Swan Maiden, and the folktale, To love a Swan Maiden.  In these tales the hunter faced great peril to find and win back the Swan Maiden and was rewarded with her love and happiness in life as she returned to be his wife again.  In this story the hunter fails to take up the challenge and simply gives up and gets a lonely and miserable death.  The lesson for any hunter is if you must fall in love with a Swan Maiden you must be prepared to fight for her!
© 16/08/2015 zteve t evans
References and Attributions