A legend of the white hare 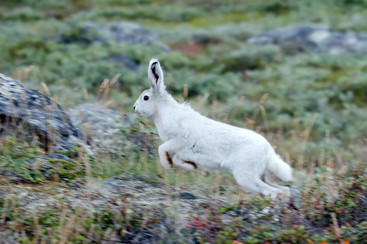 Image by Daniel W. Carstensen
In some parts of Britain it used to be said by the cunning folk that when a pure maiden who had loved a man with all her heart and soul is forsaken or is betrayed by him, then her spirit returns in the form of a white hare to haunt that man bringing him misery and death.

The ghostly hare follows the deceiver wherever he goes.  The white hare is said to be visible to the deceiver and usually invisible to almost everyone else.  In some cases the white hare saves him from danger from others so that it can continue to heap misery  upon him for its own ends.  Invariably the ghostly hare finally causes his death at a time and place to satisfy its own desire for vengeance.

There are many variations of the tale presented below and in this one the story tells how a rich landowner engaged a young man to manage a very large prominent farm he owned.  The young man came from a middle class family who were eager to improve their standing in the local community and they desperately wanted him to succeed so they could be seen to move up the social scale. 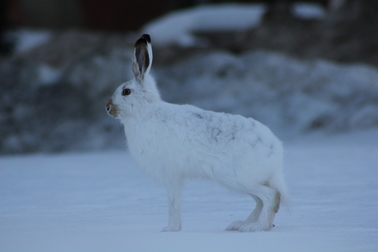 The young man was a clever, handsome fellow and was delighted to take on such a splendid opportunity to show the world his worth and build a fine name and career for himself.  He moved into the farmhouse and went about his tasks in an highly efficient and businesslike manner.  The farm prospered and so did his standing with his employer and in the local community.   His family gained greater respect and status in the local social circles and all was well.

Then one day his employer announced that he was employing a young peasant girl from a local family as the milkmaid to work in the dairy for him.  The girl, although from a poor peasant family, was very pretty with a most pleasing personality, but had received no education at all and was very naive and inexperienced in worldly matters.

The young man and the milkmaid were considerably attracted to each other, as young men and milkmaids often are, and a passionate romance followed.   The couple were not very discreet with their affair and it soon drew the attention of the young man's family who were terrified that it may come to the attention of his employer who was known to be very strict and unforgiving about such things.  But it did come to his attention and he sacked the milkmaid banishing her from the farm and gave the young man a stern warning.  However, the two lovers were still passionately in love and continued to see each other.

When his family found this out thinking that the young man would put his prospects in jeopardy and also their standing in the community, they found a girl who they deemed a more suitable and a more  appropriate wife for him to lavish his attentions on and married him to her much to the despair and heartbreak of his former lover.

The milkmaid is executed

For the milkmaid things turned from bad to worse.  A short time after her former lover’s marriage she found she was carrying his child.  Although she tried her best to cover it up and often feigned sickness she could not fool the cunning folk of the village or avoid the wagging tongues of the maliciously minded.

Tragically, one morning a new born baby was found dead in a field.  The maliciously minded of the village immediately accused her of being the mother and branded her a murderess. She was arrested and put on trial for her life.  Her former lover was called as witness and confessed to being the father and largely through his evidence she was found guilty and sentenced to death and executed.

Soon after her execution things began to go wrong for him.  The farm whiçh had once prospered under his management began to be plagued by problems and became unproductive.  Everywhere the young man went he found a white hare following him.  Sometimes it would flit under his feet trying to trip him up while at other times it appeared as a harbinger of doom bringing bad luck to any new endeavor he started on the farm. The prosperity of the farm began to suffer and the young man feared for his job.

Each time the phantom hare appeared bad luck ensued,  He tried to catch and kill it but it easily eluded him.  Even when he thought he had cornered it simply disappeared into thin air as his hands grasped at it only to reappear later to continue haunting him.

The young man is sacked

The business of the farm went from bad to worse and his employer did indeed sack him.  With no job and his reputation in ruins the young man decided to leave the locality and go off on his own where no one knew him.  He hoped that the white hare would not follow and that he could salvage his reputation and start afresh in some new enterprise or job.

He tried his hand at many new projects but each time he was on the brink of success the white hare would appear and bad luck would ruin his success.  Soon the ghostly hare began to follow him everywhere again getting under his feet trying to trip him up.  He moveď from town to town but people saw him tripping and staggering as he walked and thought him a drunkard.  Indeed he fell into the habit of using drink to drown his sorrows but the hare continued to haunt him everywhere he went.   He even took to riding a horse to escape the hare but it easily matched the pace of the horse and would run between its legs causing it to panic and race uncontrollably, sometime rearing and bucking in fright.

The vengeance of the white hare

One morning after a heavy snowfall his horse was found wandering along a lonely road.  Nearby the broken body of the young man was found his blood staining the snow scarlet.  Back down the road the hoof prints of a galloping horse could clearly be seen, but intertwined with them were those of a large hare.   When news of his death got back to his village the cunning folk nodded knowingly for they knew that the white hare must have its vengeance and the maliciously minded were please  because that is their way.
© 30/06/2015 zteve t evans
References and Attributions