The Legend of the Church of the White Stag 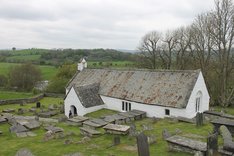 Along the banks where the River Dee flows through Denbighshire, not far from Corwen, the Church of All Saints Old Parish  sits in a pleasant position on the east bank near where the  Dee and the River Alwen join together.  The church was first mentioned in documents in 1291 and has a wealth of interesting ancient features with many ancient beams and box pews. The church is decorated with wall paintings dating from the 15th to 18th centuries of a deer, a figure of Death, to remind us of our mortality, the Apostles’ Creed and the Seven Deadly Sins and other depictions created at various points in time.  There is also a rather interesting legend attached to the church which may have a message for people to think about, though this depends on one’s own point of view.  First of all, we will briefly discuss the wall paintings of The Seven Deadly Sins and Death followed by a look at the legend.   We will then conclude by offering a few ideas for the reader to think about and make up their own minds over.

These paintings were probably not just for decoration but served as a visual aid for the congregation to think about the Seven Deadly Sins. They were called “Deadly” or sometimes “Capital” because it was believed committing them was fatal for a person’s spiritual growth resulting in separation from God and eternal damnation to Hell.  Lesser sins were called Venial Sins and did not warrant such severe punishment.

The Fourth Lateran Council in 1214 declared it a requirement that both sexes must confess their sins at least once a year to their parish priest and carry out diligently any penances imposed.  Failure could result in being cut off from the Church and even refused a Christian burial.  The church of the day believed it was necessary for the laity to understand these sins for two reasons.  The first was that they would know that they were sins and would understand the consequences and seriousness of committing them.  The second, was so that they could recognize they had committed one or more of these sins and seek absolution.  They wanted to make clear that ignorance was no excuse.

It was the priests who had to find ways to make this work.  They were tasked with teaching it to their congregations and wall paintings were thought of as good visual aids to help them think about the Seven Deadly Sins and were also used for other teachings. It may also be that to supplement the wall paintings a story that was passed on orally was created and the following legend may have something to do with that. 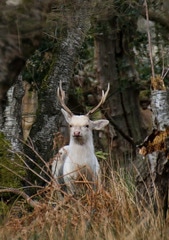 The Legend of the White Stag of Llangar

The legend attached to the church tells of the supernatural problems the builders faced with the construction of the church.  According to the legend, the church was originally to have been built near where Cynwyd Bridge spanned the River Dee.  When the work started the stone masons would work all day constructing the walls only to return the next day to find all the stone that had been put in place to have mysterious vanished.  The whereabouts of the stone could never be found and they had to restart the project from scratch only for the same thing to happen again and again.

Eventually, a local hermit was consulted and advised the builders that to succeed in building a church they must seek out a place where a Carw Gwyn, or white stag is found.  The stag had to be slaughtered and its blood mixed with the mortar in the stonework.  The next day a white stag was seen in a clearing along the banks of the river.  The stag was successfully hunted and the place where it fell was named Moel y Lladdfa or the Hill of Slaughter.  The building work was started on the new site and with the ritual completed the church was successfully finished.  According to tradition, the original name of the church was Llan-garw-gwyn, or church of the white stag, and the place became known as Llangar. Today the church is called All Saints Old Parish Church.  There is a tradition that the route the stag took to try and avoid capture marks the parish boundary.

It may be that in those days blood was mixed with the mortar of a building in the belief that it made it strong.  Another thought is that in Christian iconography the white stag is sometimes seen as a symbol of purity and holiness and a  symbol of Jesus Christ.  The hunt for the white stag was the quest for him and the story designed to encourage people to think about the way of Christ and follow him as in the hunt for a stag.
Gwyn ap Nudd

The painting of the personification of Death inspires a curious idea for some people. The church is situated on the east side of the River Dee with the Berwyn Mountain range on the west side.  In Welsh mythology the Berwyns were believed by many to be named after Gwyn ap Nudd, (Ber = bre = hill and Wyn = Gwyn) who was the King of Anwynn and where he had his palace and his traditional ancestral home in Welsh and Celtic folklore.  Gwyn was also a psychopomp who rode at the head of the Wild Hunt searching for the souls of the dead to take them to the Otherworld. However, this is believed to date from the 18th century and probably has nothing to do with Gwyn though for some it may certainly inspire associations with him rightly or wrongly.

The paintings and the legend do inspire ideas and those ideas are very often stimulated by the experience of the observer and the intention of the artist.  The reader should feel free to use their own values and ideas to create their own interpretations that are meaningful to them.
© 27/02/2017 zteve t evans
References, Attributions and Further Reading