Paiute Mythology: The Legend of the North Star

By zteve t evans
The Paiute People and the North Star

The Paiute people of North America are spread over a wide territory ranging across Arizona, Nevada, California, Utah, Idaho and Oregon. They are an ancient nomadic people who made a living from hunting and gathering and some basic farming.  The Paiutes were made up of two or three main groups which were split into a number of tribes and bands that lived scattered across their territory.  Their spiritual beliefs reflected their closeness to the natural world and they created many myths and legends which attempted to explain the world they lived in.  The following is a rewrite of a legend that tells how the North Star was created and how it helped the Paiutes and other earth-dwellers find their way in the dark. 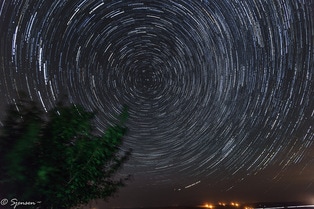 The Legend of the North Star

Many, many, years ago when the world was still in its youth the People of the Sky were restless and wandered through the heavens leaving their trails behind them.  Today, people on Earth can see the ways they went by watching the trails they left which show in the night sky.  Of all the millions and millions of stars we see in the night sky the only star that does not appear to journey across the night sky is the North Star.

However, the North Star does move.  It moves in a small circle around the north celestial pole each day but from earth, it looks stationary.  Unlike the sun, moon, and stars it does not rise or set.  It appears like the hub of a wheel to stay still in a constant position in the sky and in the northern hemisphere is used as a guide to find north.  However, according to Paiute tradition back in the time of the earth’s youth there was not a  North Star.

In those days Shinoh, the mountain sheep had a son named Na-gah who was a great climber who delighted in climbing the summits of the great mountains.   He was very brave and sure-footed and had great endurance that gave him the ability to climb even the most difficult and steepest of mountains.   His father was very proud of his son and loved him greatly.  To honor him Shinoh gave him a special headdress that had two beautiful coiled horns that were set on both sides of his head.   These gave him great dignity and an air of royal command and magnificence. 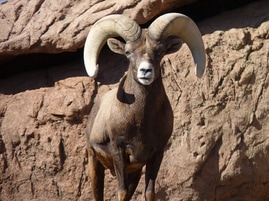 Nah-Gah, the Climber of Mountains

Na-gah spent all his days doing the thing that gave him the greatest pleasure which was climbing mountains. The higher and more difficult they were the better he liked it.  He would happily eat the coarse, sparse grass he found on the rocky ridges and the lofty peaks of the world.   It was in those high and lonely places he was at home and happy, breathing in the wild air all around him.  In all of his days, he had never found a mountain, no matter how steep or how high, he could not climb.

One day as he wandered the world alone he found a mountain that he had never climbed before.  It was so steep and high that he could not see the top because its peak was hidden in clouds.  He looked at it and was immediately struck by how difficult and dangerous it looked to climb.  Deep inside he knew this peak would be his greatest challenge so far but it did not daunt him.   Instead, it excited him, for Na-gah was confident in his own strength and ability and said to himself,  “This is unquestionably the highest and most difficult mountain to climb I have ever seen, but I will climb it right to its highest part.”

So taking up the challenge he explored the base of the mountain searching for a good place to start his climb.  Round and round the mountain he walked but to his surprise discovered that the cliff appeared to be too sheer and smooth to climb wherever he tried.   He was annoyed to think that this might be the first mountain he had ever found that he could not climb. Nevertheless, he was unwilling to give up and felt ashamed at the thought of failure.  He thought his father would surely be ashamed of him if he failed and would be so proud to see his son standing high upon this peak silhouetted against the sky.

Na-gah decided he had to try again and walked round and round the mountain attempting to find nooks and crannies his hooves would be able to get a grip in.  Each time he found a crevice or crack in the rock he would attempt to climb the mountain.  Each time he was forced to retreat as it was just too difficult to go further.  After many attempts, he at last found a large crevice in the rock which appeared to run down instead of up.  Out of desperation, he decided to follow it and it took him down for a long way but then began to rise upwards.  With great relief, Na-gah followed the path upwards which turned into a long dark tunnel.  Feeling more of hopeful he continued on into the tunnel finding he was climbing steadily upwards in the darkness.

Soon it was so dark he could he could not see and the floor of the cave was littered with many, many, loose stones and rocks which made it very hard to walk upon.  His hooves dislodged many of these causing them to roll down the slope behind him.  All he could hear was their clatter as they rolled down the steep incline behind him and he pressed on.  The tunnel became so difficult he could barely walk and often fell and scraped his knees.  Of all of the difficult mountains and the dangers he had faced climbing them, he had never been in such a dangerous place as this before.  He began to feel exhausted and very frightened saying, “I should go back the way I came and find an easier way.  I don’t like these dark tunnels I like the high cliffs and ledges with the wind in my face.   The tunnel walls enclose and cramp me and the darkness blinds me.  I want to get out!”

He turned round but to his dismay, he found the stones and rocks he had dislodged had blocked the tunnel he had come up.  He knew he had no other choice than to try and find a way out upwards.  Turning around he scrambled back following the tunnel uphill in the hope it would take him out again.

After many hours scrambling up the tunnel’s path, at last he saw a chink of light ahead that filled his heart with hope.  Forcing himself onward he pushed on up the steep incline until he stumbled out into the light.   Looking around he was awed to find himself on the highest peak he had ever been on in his life.   There was barely enough room for him to turn around.  He looked down and saw the rock face was too sheer whichever way he turned for him to be able to climb down.  Of all of the great mountains he had climbed he had never climbed as high as he was now and it made him feel dizzy to look down.  He knew he could never return down those sheer cliffs and he knew the tunnel was closed and realized that he was trapped in that lofty place and would die there.   “There is no way down and here I must stay until I die,”  he said, “But, I have overcome all of the difficulties and I have climbed my greatest mountain and I am proud!”

Even in that high place, there were a few clumps of mountain grass sprouting from the nooks and crannies and he ate some and found a small puddle of water and drank.  After that, he felt a bit better but as he looked around he saw the Earth far, far, below and knew he had reached undreamed of heights. 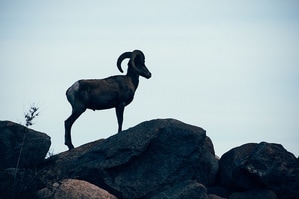 It so happened that his father at the time was walking across the sky looking for his son, but he could not find him anywhere.  He called his name loudly but there was no answer at first.  Then on his high mountain top, Na-gah heard his father calling to him and answered.   Shinoh saw his son perched on the highest mountain and knowing there was no way down for him was most sorrowful.

“Alas for my son, for there is no way he can return to earth.  He has climbed to an unimaginable height that no one has climbed before and has at last reached his limits, but I will not allow him to die.  I will transform him into a star and he will be a beacon in the night for all things on earth to find their way by. He will shine where all can see him and he will stay still so he can easily be found. Once he is found from his brightness and stillness the people on Earth will find their way.”

So Shinoh transformed his son into the North Star and he became the one fixed point in the night sky of the northern hemisphere.  The people called him Qui-am-i Wintook Poot-see which means North Star and Na-Gah on his mountaintop became a beacon of light that enables the lost and wanderers of the earth to find their way through the night and gave hope to those climbers of mountains.

There are other sheep who have also found the great mountain following Na-Gah’s light.  Shinoh saw this and transformed them into the stars you see at the base of the great mountain today. These can be seen in the night sky and are known as the Big Dipper and the Little Dipper and one day they hope to ascend the mountain and join Na-gah.