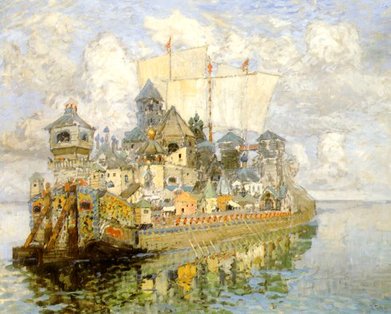 The Invisible Town of Kitezh (1913) by Konstantin Gorbatov - Public Domain
According to Russian legend hidden beneath the waters of Lake Svetloyar is a mythical city built by Georgy II, the Grand Prince of Vladimir in the early part of the 13th century.  The first reference to Kitezh comes in an anonymous late 18th century book known as the Kitezh Chronicle which was thought to have originated among the Old Believers of Russia.  The book does not actually say the city disappeared or that it was covered by the lake, just that is suddenly seemed to cease to exist after it was destroyed by war.  But for many local people the legend is a lot older than the 18th century and many see Lake Svetloyar as a place of special spiritual value and a place of pilgrimage.  The waters are considered by many to have healing and health giving properties.

The town of Maly Kitezh or Little Kitezh by the River Volga known today as Krasny Kholm was built by Georgy ll in the early 13th century. He then built Bolshoy Kitezh or Big Kitezh on the shores of Lake Svetloyar.  Local tradition says that Georgy took the name Kitezh from a royal residence called Kideksha that had been destroyed by the Golden Horde of the Mongols led by Batu Khan in 1237. 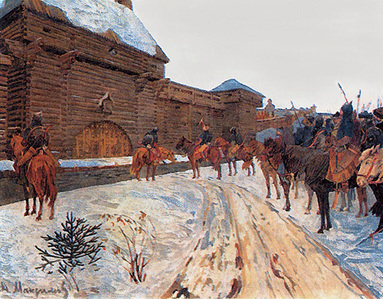 According to legend when Batu Khan sacked the Russian city of Vladimir he first heard of Kitezh and became determined to capture it and he led the Golden Horde into Russia. The Mongols attacked and captured Maly Kitezh forcing Georgy to retreat with his army to the forests towards Bolshoy Kitezh .   Although they had found and captured Maly Kitezh the Mongols did not know where to look for Bolshoy Kitezh as it was hidden on the lakeside which was protected by thick forest. Only those who knew the secret paths could find it. 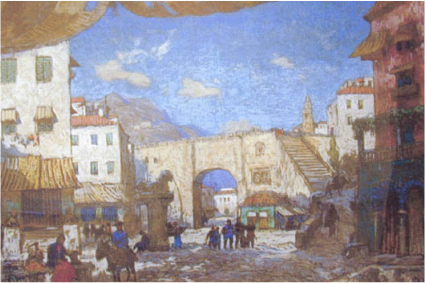 Once they had passed through the forest the town lay on the shores of the lake ripe for plunder but to the astonishment of Batu Khan and his army the town was totally undefended.  There was no wall or fortifications to protect it and no warriors waiting to join battle with them. Batu Khan had made no attempt to keep secret his planned attack, or try to take the town by surprise and thinking the vastness of his army would be enough to overwhelm it he was expecting a ferocious battle.

Although the citizens of the town were aware of the danger that their town was going to be attacked and they put to the sword they made no attempt to defend themselves, or the town. To the amazement of the Mongols instead of fighting the citizens were engaged in praying to God to save them.  Even when Batu Khan ordered his Golden Horde to attack they made no attempt at defense instead they carried on praying faithfully and steadfastly to God to save them.

Batu Khan and the Golden Horde attacked the town unchallenged  but as they were about to set foot in its precincts something astonishing happened.  To their wonder and amazement hundreds of fountains of water suddenly spurted skywards stopping the astonished attackers in their tracks.

Wonder and amazement turned to fear and panic as the terrified Mongols scattered to the safety of the forest.  From there they watched in fear and wonder as the water rose over the town slowly covering all the buildings as one by one they vanished under the waves.   Batu Khan watched as the sun gleamed on the great dome of the cathedral as the waters rose. The cross at its peak was the last thing to finally succumb to the waters as waves lapped over it and the city of Kitezh entered into Russian legend. 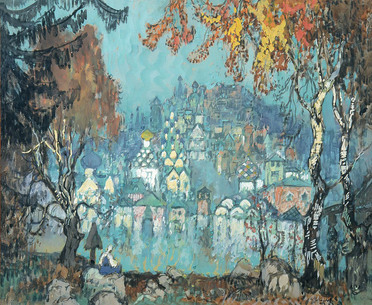 Sometimes it is said Kitezh is called the invisible town by  the Old believers because although it is believed to be there it cannot be seen except by the pure of heart and soul.  Old believers were a group of people who had split from the official Russian Orthodox Church after reforms were made.  The split in the Russian Orthodox Church is beyond the scope of this work.  There are some who think the Old Believers found the notion of a hidden city where only people who lived and worshiped in the traditional ways could enter attractive and built upon the legend.  The split in the church came after the time of Georgy ll and the Mongol invasion and as with many legends parts get embellished and changed though original elements of the story may remain.

The legend has inspired many works of art, plays, films a video game, music and even an opera,  The Legend of the Invisible City of Kitezh and the Maiden Fevroniya by Nikolai Rimsky-Korsakov and premiered at the Maryinsky Theatre in St. Petersburg, on February 7, 1907.

Ancient legends and myths had meaning for those who told them in the past and are often believed to carry a message for future generations.  Therefore the reader is invited to form their own views as to what message the legend may carry or mean, using what knowledge they have of the past and relevant events and within the context of their own lives and experience today.
© 04/07/2015 zteve t evans
References and Attributions
Copyright June 4th, 2015 zteve t evans