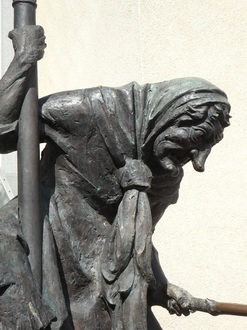 Dartmoor is a place of many strange legends and folktales featuring the most extraordinary characters.  One of the most extraordinary must surely be Vixiana the Witch of Vixen Tor. She was also known as Vixana and had an evil reputation among the local people who greatly feared her.  There are a number of different versions of her story and the one given here has been pieced together from more than one source.  A brief description of the tor followed by the story of how Vixiana came to meet her match is presented and concludes with a few conundrums to think about.

The tor is situated between Tavistock and Princetown on Dartmoor.  It is also called ‘The Sphinx of Dartmoor” because of its sphinx-like appearance when viewed at certain angles.  Some say it's a vixen.  Others say that when seen in silhouette to the sky it can also resemble an old man wearing a cap who has his back turned on his wife. Different people tend to see different things but essentially it is a mass of granite that appears to be made from rocks piled on top of each other.

Vixen Tor became a place of ill omen and foreboding in the lifetime of Vixiana who had a terrifying reputation.  According to tradition at her bidding, creatures from the Underworld had hollowed out a cave which ran underneath the tor.  There on bleak and wild Dartmoor she lived in that cave alone.

She was ugly and so old that the local people could only ever remember her as being old even when they were children.  She just got older and older, uglier and uglier and more evil as the years passed by.  Indeed, she was a terrifying sight.  She was tall standing at about six feet and very bony and thin.  She had long lank black hair that hung down around her knees.  Her face was long and thin and the sallow skin was drawn tight over her bones.   Her nose was long and thin and hooked and she had penetrating eyes of deep moss green. Vixiana never washed herself or her clothes and so a terrible smell clung all around her.  She only had two front teeth in her mouth and both were yellow and rotten and protruded over her lower lip.

She was bent and walked in a stooped fashion with the aid of a knobbly gorse stick.  Her temperament was like her appearance very, very, evil.  Vixiana hated everything and everybody and to be fair everything and everybody hated her.  She would carry out random acts of malice when out walking across the moors such as thrashing sheep with her stick that were too slow to get out of her way.  One of her great joys was to find and smash the eggs of the moorland birds such as the harmless skylark laughing and cackling with glee as she crushed them underfoot. 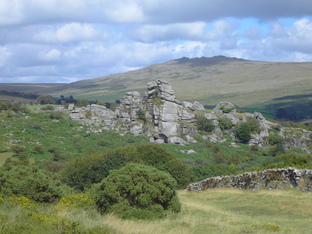 At sunset it was her habit to climb to the top of the tor and sit on the summit just watching the ending of the day and spying out victims.  Her keen green eyes would survey the moor around for travelers. She also kept watch on the track from Chagford which ran across the moor to Tavistock and ran near the bottom of the tor for victims.

When she spotted a traveler coming in her direction she would watch them until they drew near the tor.  Then she would cast a spell that caused a thick blanket of moorland fog to quickly form around the traveler.  He would then become completely lost in his bearings not knowing which way to turn.  When she had him completely lost she would call out to him making out she was guiding him go safety.  In reality she was guiding him to a deep and dangerous bog that lie at the bottom of the tor.   When the unsuspecting traveler set foot in the bog he was slowly sucked into its depths with no chance of escape.

As soon as Vixiana heard him screaming for help she would cast another spell to disperse the fog so she could enjoy the sight of watching him struggle and drown in the filthy mire.  The last sound the poor unfortunate soul might hear would be her cackling laugh.  Worse still would be the sight of her ugly terrifying face as he was finally sucked below the surface to his death. Although local people avoided the Vixen Tor area completely there and only a few occasional travelers along the track from Chagford to Tavistock who fell victim to her.   This really annoyed her and made her increasingly resentful taking it out on the victims she managed to catch.

Now although everyone who had heard of the reputation of Vixiana of Vixen Tor were terrified of her and stayed well away, there was one handsome young man from a nearby village that was different.  He had heard of her reputation, but unlike other local people was not afraid.  One day he decided to take a walk over the moors to Vixen Tor to see if she was as bad as everyone said.  It needs to be said that this was no ordinary young man because he had two extraordinary attributes that made him special.

The first was had was a very deep hatred of witchcraft and witches. The second was he was that he knew no fear of anything in the world.  To top these two attributes off he had been given two gifts by the piskies of Dartmoor for helping one of their kind to escape a bog they had fallen into.  The first gift they had given him was a magic ring that made the wearer of it invisible to all regardless of who they were.  The second gift was eyes that could see through the thickest and most dense fog and mist which was very handy to have when walking on the moors. 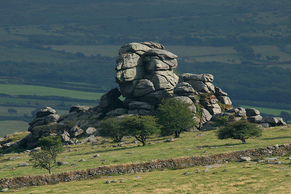 Determined to find out what was going on at Vixen Tor he set out walking over the moor.  He joined up with the old track that ran along the  bottom of the tor right past Vixania’s lair.  Vixiana was sitting on top of the tor looking out for any unsuspecting travelers who may venture her way.  When she saw the young man she jumped with joy for there were few victims lately. She could not wait to hear his screams and cries and see his desperate struggles before finally succumbing to the bog.

So without further ado she cast the spell that brought the fog quickly down upon the moors.  The fog came down like a thick blanket around the young man but he took no notice and kept on walking.  Vixiana sniggered and listened out to hear him fall into the bog and to hear his struggles and cries for help.  But no sound came as with the eyes the piskies gave him he could see the bog and he walked safely around it and out of the fog bank and continued upon his way.

Vixiana was furious and screaming with rage she cast another spell that brought down an even thicker fog. Hearing the blood curdling scream the young man looked up and saw Vixiana standing on top of the tor.  He slipped the magic ring on his finger and turned instantly invisible.  Vixiana stood gobsmacked as he disappeared before her eyes.  Although she could not see him he could see her even through the fog with his special sight.  While she was bemused looking for him he walked around the back of the tor and crept up and stood beside her as she looked out over the moor for him.  Being so close he could now smell her and he was disgusted and nauseated by the stench.

She stood on top of the tor ranting and raving, wailing and screaming desperately trying to catch a glimpse of the traveler. But he stood nearby wearing his ring and remained invisible to her.  He stood and watched her capering and wailing and then smiled and stepped forward and gave her one huge push and knocked her off the tor’s edge.

She fell spinning and screaming through the air landing in the stinking black mud of the bog below.   He watched as she tried to stand up but the more she tried the more the bog pulled her down.  He smiled as she screamed and struggled but the more she struggled the further and faster she sank.  Soon the mud was up to her neck and she screamed. Then it was up to her chin and she screamed.  The moors rang with the sound of her screaming and he stood looking down and smiled. Finally it was up to her mouth and she opened it to scream and black stinking mud oozed into her mouth and filled her throat.  The young man watched from the tor as she disappeared into the bog and he smiled with satisfaction.

Then all was quiet on the moor and the man sat and watched the spot she disappeared under for some time as if he was afraid she may claw her way to the surface but she did not.  She was dead and her body had gone to rot in the depths of the bog along with all of her victims.  Vixen tor was now free from her evil presence and the young man smiled as he went home across the moor.

So that was the end of Vixiana the Witch of Vixen Tor.  Its sad in a way that despite her evil ways no one seemed to care when she was dead, rather they were glad.  Perhaps if Vixiana had found someone who cared for her while she was alive maybe she would not have turned to such evil ways and could she have loved in return?