James Mooney (1861-1921) was an American ethnographer who studied among the Southeastern Native American people as well as those on the Great Plains.  He spent several years living with the Cherokee people and compiling their myths, legends, and traditions into a book,  Myths of the Cherokee (1902),   Some of these legends and myths reveal that the Cherokees believed that there existed a kind of “Otherworld.”  This was populated by a people who appeared similar to themselves but were invisible unless certain rituals and fasting was performed which allowed the Cherokees to make contact with them.  However, these people could make themselves known to the Cherokee at will and sometimes did. There were also various spirit beings large and small similar to giants, dwarves, and fairies.  Presented here is a legend collected by Mooney called, Käna'sta, The Lost Settlement that feature the belief in the otherworld and its spiritual inhabitants  and what follows is a rewrite base upon this. 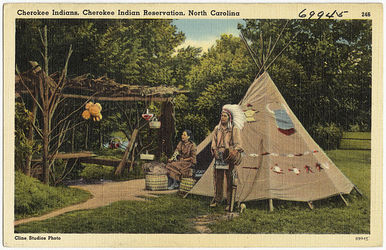 Käna'sta: The Lost Settlement of the Cherokees

According to Mooney, the  Cherokee people say that there was once an old settlement on the French Broad River called Käna'sta but the people who lived there are now long gone.  A legend says that one day two strangers visited Käna'sta and asked to be taken to see the chief as they had a message for him.  The strangers looked very much the same as the villagers and did not seem to be a threat so they were taken to see the chief.

After making the traditional greetings and welcoming them with full Cherokee hospitality the chief asked them what message they carried to him, thinking they were probably from a Cherokee village to the west of Käna'sta. To his surprise, they told him,

“Like you, we are also Cherokees and our town is very close but you have never seen it, but we are there.  In Käna'sta you have sickness and disease.  All around you are enemies who make war on you when they can. One day a stronger enemy will attack and drive you from your homes and take Käna'sta and make you homeless and miserable.  All who live in our town are happy and free of sickness and no enemy can find us.  We have been sent to Käna'sta to invite you to come and live with us in Tsuwa`tel'da which is the name of our town.”

They pointed to Pilot Mountain where they said their town was situated and continued speaking, “It is true we do not live forever and there are times when game becomes scarce, for Tsul`kälû who lives in Tsunegûñ'yï owns the game and it is his to give or withhold. Even so, we live in peace with no need to worry about enemies or danger.  We have made this invitation and now will leave you to think about our offer.  If you decide to accept our invitation you must fast for seven days and then we shall come to lead you there.”   With that, they left heading into the west.

They packed all their belongings and goods together and gathered at the village lodge and began their fast.   After six days of fasting, just before sunrise on the seventh, out of the west came a great throng of people with the two strangers at their head who had delivered the invitation to the chief.  They looked just like Cherokees might look from another village and they greeted the Käna'sta villagers warmly and with friendship and took up their belongings and led them towards Tsuwa`tel'da.  There was one man with the Käna'sta villagers who was not one of them but from another Cherokee village nearby but decided he would like to go to see what it was like. 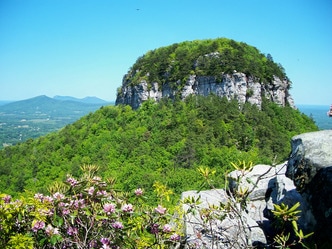 Pilot Mountain
The Journey to Tsuwa`tel'da

The party made their way to Pilot Mountain led by the two strangers who were now their guides and eventually they came to a  bare rock cliff face.  Although it looked solid and impassable the two guides led them on and a small cave appeared that had been hidden by folds in the rock.  The two guides led the party into the cave and the villagers found that there was a narrow passageway inside which became broader as they moved along it. Eventually, it opened out into a wide open country.  The villagers looked on in wonder and saw lodges set in long lines from east to west.  The people of Tsuwa`tel'da had their lodges on the south side and they had prepared lines of lodges for the villagers of Käna'sta and their children.  So the newcomers settled into the lodges and made themselves at home. After they had settled in they noticed that there was still a good number of lodges that still remained empty and they were told that there would be people coming who would fill them.  They were also told that there was another Cherokee village higher on the mountain and above that on the mountaintop lived the Thunderers who the Cherokees call Ani'-Hyûñ'tïkwälâ'skï.

He then told the man, “Return to your own village and tell the people about us.  Tell them there is a place where they can live in happiness and peace and there is a place waiting especially for them.   There are others of us living in the high mountains and in Datsu'nalâsgûñ'yï and all around and if your people choose they can go to them it is all the same.  Know that though you cannot see us unless you fast, we can see you and are with you.  We are with you wherever you are and in all your dances.  If you want to see us you must fast for four days and we will come to you on the fifth to talk to you.  Then if you and your people want to join us fast for another seven days and we will come and take you with us.”

With that, the chief led the man back to the passage that led to the cave on the outside of the mountain.  When the he looked around the chief had gone and there was just a bare blank wall of rock.

It is said that the people of the lost settlement of Käna'sta were never seen again and are still believed to be living inside Tsuwa`tel'da, or Pilot Mountain.   It is said the mountain is haunted and that strange things go on there and local people avoid it. Inside Pilot Mountain, the hidden people watch their Cherokee brothers and sisters wherever they may be and wait for them to join them.
© 21/01/2017  zteve t evans
References Attributions and Further Reading