By zteve t evans
The Brothers Grimm collected this German fairy tale The Six Swans and it was also included a version in The Yellow Fairy Book by Andrew Lang. 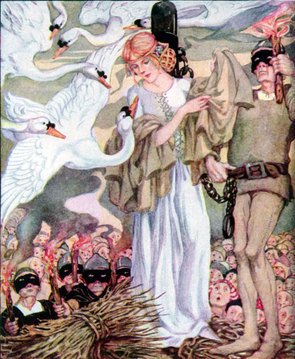 The story tells how a king had six sons and a daughter from his first marriage. When his wife died he remarried but his second wife was the daughter of a witch. Although she was very beautiful her heart was evil.  She hated her step sons and cast a spell on them that transformed them into swans.  The brothers could only change into humans for fifteen minutes in the evenings.

A shirt of starwort

Their sister resolved to free them but the only way it could be done was for her to make each brother a shirt made from starwort and for them to wear it. Furthermore, she must not speak, or laugh, for seven years, or the spell will never be broken and her brothers will stay forever swans.  Dutifully she kept her silence and refrained from laughing and set about making her brothers a shirt of starwort each.

As time goes by she has grows to be very beautiful and a king from another country finds her and falls in love with her. Although she is still under her vow of silence and working on making her brothers the shirts they marry and she becomes his queen.  The king had a wicked stepmother and  after the birth of their first child the King’s stepmother abducts the child and and makes false accusations against the queen.  Unable to break her vow of silence she cannot defend herself and is sentenced to be burned at the stake.

Nevertheless she still manages to continue working on the nettle shirts for her brothers.  By the day of her execution she has completed five but the sixth is incomplete missing an arm.  When they take her to the stake she takes the shirts with her.

The timing of her burning coincides with the time of seven years when the spell can be broken and six swans arrive from out of the skies.  As they land she throws the shirts over each swan and they turn into humans.  In some versions, because the sixth shirt is incomplete and was meant for the youngest brother, he remains a swan. In other version the five brothers return to human form but although the sixth turns to human, one of his arms remains as a swan’s wing.

The condemned queen though is now free to break her silence and the king’s stepmother is forced to retract her accusations and return the baby she abducted.  The king, furious at  his stepmother’s evil deception orders that she be burnt at the stake instead of the Queen.  The King and Queen and their child and the six brothers live in peace and harmony for the rest of their days.
© 11/10/2015 zteve t evans
References and Attributions