Welsh legends: Mereid of Cantre’r Gwaelod
By zteve t evans
Cantre’r Gwaelod was a legendary land situated in Cardigan Bay, Wales, that became flooded by the sea drowning many of its inhabitants and forcing survivors to seek new homes further inland.  There are many different legends which give an account of how this deluge happened and this work looks at the one which casts the blame on a maiden named Mereid, who was responsible for maintaining a sacred well which fed the spirit of a goddess into the land. 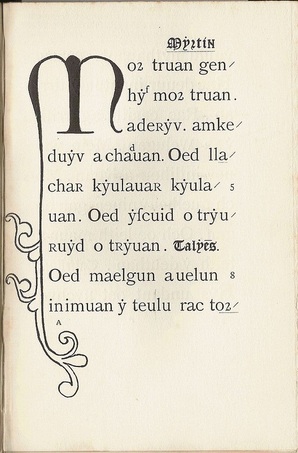 Copy of page from Black Book of Carmarthen
Possibly the oldest known version of the flooding of Cantre'r Gwaelod is found in the Llyfr Du Caerfyddin, also known as the Black Book of Carmarthen, where it is found as the poem Seithennin, or Boddi Maes Gwyddneu.  Although it was recorded around 1250 it is believed to have had much older origins.   One of the male  characters named Seithennin appears in later versions where he is either fully, or partly responsible for the flood.  In this version the maiden named Mereid is the one ultimately responsible for the disastrous flood .

The cause and events of the flood indicate that the legend is from a far older era with the survival and worship of a pagan goddess into the Christian age.   It also has similarities to the deluge legend of Lake Bala and the catastrophe that legend says happened to the Breton city of Ys.

In those days the land was ruled over by Gwyddno Garanhir  and was called Maes Gyddno.  It was an extremely fertile and productive agricultural land yielding fourfold the produce of any other land in Wales

Although as ruler of the land Gwyddno had many responsibilities he had two sacred duties that he was charged with that overruled everything else.  The first sacred duty was to protect the land from invaders.   To take charge of the defense of the realm he appointed his greatest warrior and leader whose name was Seithennin.  The second sacred duty was to maintain the sacred well of the land that was the home to the goddess who was the spirit of the land and the door way to the underworld. This important and responsible task he appointed to no one less than his daughter Mereid who was given the title of Maiden of the Well.  It was a special position of high honour and privileges but it had its drawbacks.

Every evening before the sun went down and every morning just after dawn  she had to draw three buckets of water from the well and empty them in to  the irrigation channels that were outside the keep of  her father's castle.  In this way the spirit and energy of the goddess was spread throughout the land giving it unsurpassed fertility.

To begin with Mererid diligently kept to her duties but as the ruler's daughter she came to meet more people who told her stories of the world outside her father's realm.  As  she grew older she tired of her daily responsibilities and grew bored with them. She began to yearn to travel abroad and meet exciting new people and see new places and escape the twice daily grind of the routine that as Maiden of the Well was her sacred responsibility to fulfill without fail.  But she knew she had to keep on doing it and she could see no hope of escape. 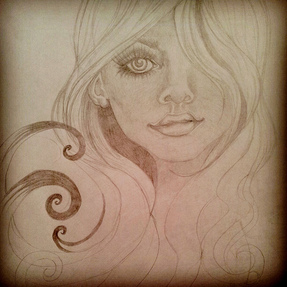 With the turning of the seasons and the passing of the years Mereid grew increasingly frustrated and bitter with her lot in life and yearned to escape.  She had grown to full womanhood and desperately wanted to experience life as an ordinary woman.

As the daughter of the ruler of the land she was also a princess and would often participate in feasts where rulers and important people from other lands were invited.   At these events she met many young men and princes from other lands that normally would be a potential suitor for her, if only she was not tied to her duties as Maiden of the Well.  She formed a plan of escape and with whispers and innuendo she let it be known that the land was rich but poorly protected and ripe for the taking by some bold leader.  To add to the legitimacy of the taking and to free her from the chains of her duties to the well she offered her hand in marriage to any who should complete the challenge.

Mererid was subtle and careful with who she spoke to and what she said in case she should be found out. Eventually the rulers and princes from neighbouring lands began to pay attention to her words for she was an attractive woman and they looked upon the rich land of Cantre'r Gwaelod covetously.  Soon an army approached the borders of the realm looking to invade and the leader wanted to take  Mereid for his wife to give the invasion a mask if legitimacy.

Messengers arrived from the borders to warn Gwyddno about the invasion.   Mereid was present when they arrived and feigned shock and horror but was secretly pleased.   Gwyddno sent for Seithennin, his war lord, to prepare a response to defend the land.  Seithennin was dispatched to raise an army and meet the invasion force in battle on the borders of Gwyddno's kingdom.

Seithennin gathered the best warrior of the 16 villages of the land and met the invasion force in battle on the border.  Although the Seithennin army was smaller the soldiers were brave and fought with great force.  They also had the spirit of the goddess which ran through all of the Cantre'r on their side so with Sethrennin's bold leadership they vanquished the invaders after long and bitter fighting. 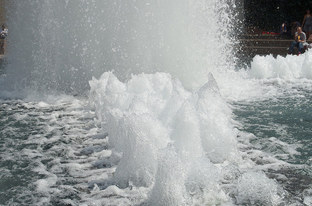 Mereid was devastated by the failure of the invasion and was now in fear that her own treachery may be discovered by her father.  However she was too proud to flee the Cantre'r or to confess to her father what she had done so she determined her treachery must remain a secret.  She was also angry that her plan had failed and resentful that she would have to continue with her role as Maiden of the Well which she hated and could now see no hope of escaping.   In her anger and despair she hatched a new and deadly plan.

When the evening drew in she went down to the well to pretend to  fulfill her duties but instead of drawing a full bucket of water she drew an empty one and went through the motions of tipping it into the channels that irrigated the land. She repeated this act two more times in the pretence of carrying out her duties.  In her warped state of mind she thought it better that  the entire realm should perish than her treacherous secret be discovered.

When she had completed the charade she returned to her father's palace and readied herself for the great feast.  To assuage her guilt and allay her fears she threw herself into the celebrations, drinking, dancing and flirting with the young men. At midnight she chose the most handsome young man at the banquet and took him to her bedroom.

At daybreak as she lay asleep in the arms of her lover she was awakened by a terrible whooshing and gurgling sound of rushing water.  Throwing on a robe she ran to the castle ramparts.  As the sun rose she saw to her absolute fear and horror a huge spout of water issuing skywards from the sacred well and falling upon the land in sheets of  water.  Sprays of well water fell from the sky soaking her.  The water tasted dead and salty and she was filled with remorse as she realised the terrible catastrophe she had unleashed upon the  realm.

Shouting warnings she ran from the ramparts down to the stables where she quickly saddled her a horse and tried in vain to reach the sacred well hoping she might find a way to stop the flood.  But the goddess of the well was angry she had been neglected and sent forth ever more powerful torrents of water.

Try as she might her efforts were in vain and although the horse strove valiantly to ride against the flood the current was too strong and horse and rider were pushed back and could not get near the well. In shame she turned her steed away from the well and tried to ride to high ground but the growing flood quickly washed over horse and rider drowning both as the waters rapidly spread and deepened over the fair land of Cantre'r Gwaelod. 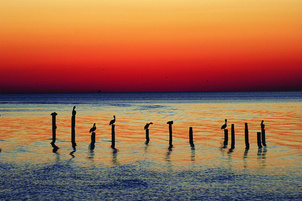