Chilote mythology is the mythology of the people who live on the Chiloé Archipelago lying near the coast of southern Chile.   The biggest of the islands is Chiloé, which means “land of sea gulls” and  pronounced, Chee-lo-way. Archaeologists believe the islands have been settled by humans for at least 5,000 years.  The people of the Chiloé Archipelago are known as Chilotes and are the descendants of Huilliche and Choncho Indians and the main language spoken is now Spanish.

Their lives and well being, in the past, present and the foreseeable future are inextricably linked to the sea.  This dependence has seen the evolution of a unique mythology, folklore and traditions to help them explain and make sense of the world they live in.  Naturally, for an island people, the sea plays a large part in this mythology, reflecting its importance to the people. 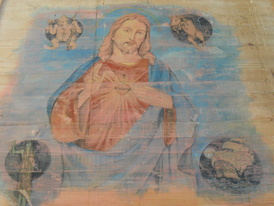 The indigenous island people; the Chonos and the Huilliche,  while retaining much of their original mythology incorporated into it the traditions and religion that the Spanish conquistadors brought with them creating a unique mythology  separate from that of mainland Chile.

When the Mapuches, a mainland tribe of indigenous people, in 1598, defeated the Spanish in a battle known as the Disaster of Curalaba the people rose up against the Spanish ending their rule and control over much of the Chilean mainland. The islands were cut off and in isolation they evolved their own unique system of mythology and beliefs from their own traditional folklore and the Christian stories and folklore from Spain.

In that system a number of myths and legends were developed which explained important events and daily problems of existence in terms that they understood and were relevant to them.  These myths revolved around magical creatures and events that helped them make sense of the world around them.

The creation myth of the Chiloé Archipelago

The most significant creatures in Chilote mythology were Tenten Vilu and Caicai Vilu and the most important event was the creation of their archipelago home.  The legend tells how these two mighty creatures fought each other in a battle of titanic proportions.  From the destruction and debris from the battle the islands were formed.

The Chilote Royal Family of the sea

Other entities in Chilote mythology

There are also a number of other magical and mythical people and entities in Chilote mythology that evolved to explain certain aspects of the natural environment the people lived in and of the human condition.  El Caleuche is a ghost ship that sails the seas around the islands.  It carries the souls of those drowned at sea.

These are the main entities of Chilote mythology but there are very many more traditions, folktales and legends that have evolved over the centuries to help the local people make sense of their world.
References and Attributions