The Chiloé Archipelago is situated off the coast of Chile and the people who live on these islands are isolated from the mainland and are forced by circumstances to be independent and self-sufficient.  Their island society evolved and developed around the natural resources of their environment and being island folk  the sea is a big part of their lives.  They evolved their own ways of explaining the world which grew into their own unique mythology and folklore and many of the stories revolve around the sea.  One of those stories tells how the sea is kept clear of the dead bodies of those who are drowned at sea who must sail for eternity on a ghostly ship the Chilote islanders call El Caleuche. 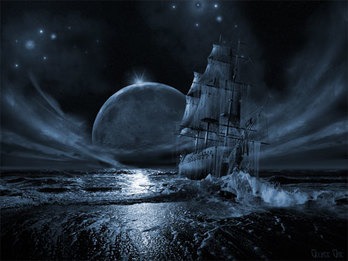 This strange phantom ship is believed to be a living being that is always awake and on its guard against unwanted intruders.  It appears as a shining white ship  with  three masts  that carry five sails.  The legend tells how it blazes with lights from all its windows and how the sound of music and revelry is heard floating across the water from the ship as if some great celebration is underway.  Some who have seen it have tried to get near to it, but according to tradition, it disappears as soon as another ship sails too close and is believed to have the capacity to travel underwater.

The El Caleuche is said to have two distinct groups of beings on board.  There are dead humans who have been brought back to life and supernatural beings from Chilote mythology who appear to control it.

The ghostly ship is said to be manned by the those humans who drowned at sea and were taken to the ship by three mythical characters from the Royal Family of the Sea in ﻿Chilote mythology﻿.  These were two sisters and a brother who were the children of the Millalobo and the Huenchulla who were the king and queen of the sea.  One sister was known as sirena chilota and is similar to a mermaid and the other sister is the Pincoya, a water spirit, who helped their brother the Pincoy take the drowned mariners to the El Caleuche.  On board El Caleuche the dead return to life,  perhaps in a similar state to zombies and man the ship. Other crew members are also believed to be kidnapped fishermen and sailors who were transformed into a creature similar to an Invunche which is another strange entity in Chilote mythology. Another mythological figure, Brujo Chilote, a kind of evil wizard or sorcerer also likes to join the celebrations on board El Caleuche. He uses a magical animal similar to a water horse called caballo marino chilote.

Origin of the El Caleuche legend

Origins of the legend are uncertain but perhaps the El Caleuche is a distant memory  of the early Spanish ships and European explorers and adventurers who sailed around the southern tip of South America and then northwards up the coast on their voyages of exploration.  Such ships must have been an awesome sight to these people especially if lit up at night and would probably have made a lasting impression appearing as if they were from another world which to the islanders they were.
© 05/11/2015 zteve t evans
References and Attributions