Supernatural beings in the Chilote mythology of Chile

By zteve t evans
The Chiloé Archipelago lies just off the southern coast of Chile.  The islands are remote and isolated and over the centuries the people developed a unique mythology and many folk traditions that enriches their island culture.  Their mythology tells of how the archipelago was believed to have been created and the deities that take care of the sea.  They also have a number of supernatural creatures and entities that have evolved along with the mythology. The following examples give an insight into the rich culture that grew up among the island people. 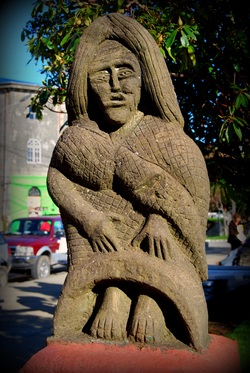 The Basilisco chilote is a strange beast that has the body of a snake and the head of a cockerel.  It is hatched from an egg that has been incubated by a cockerel.   It is said that  creature  will slither under houses and dig a hole to create a lair.  From there it draws the saliva, phlegm and moisture out of the bodies those who sleep there, causing their flesh to shrink and shrivel against their skeleton and death through dehydration. At all costs one must avoid looking into the eyes of the basilisco as its gaze turns humans to stone.  It is best not to let Basilisco chilote hatch from an egg but to kill one the egg must be burnt immediately it is laid and the chicken that laid it must be killed to stop more eggs being laid. There is only one way to be free of the Basilisco chilote once it has targeted a victim is to burn the house above its lair to ashes.

In Chilote tradition a witch is called a Brujo and there are only male witches.  It is said that near the village of Quicaví they have a cave called the Cueva de Quicaví that they meet in.   To join the brujo and become a witch you must spend 40 days in a waterfall to wash away baptism.  You must then kill a person you love and make a purse from their skin to carry your book of spells.  You must then make and sign a pact with the devil which states when he can claim your soul.   Brujo are believed to be able to cause death and illness from afar and are capable of great evil.

Around the seas of the island there is said to sail a strange ship the islanders call El Caleuche.  It carries a strange crew who were once fishermen or sailors but who drowned in the sea.  These were transported to the ship by three members of the mythical Royal Family, the Pincoy, a prince, and the two princesses, La Pincoya and the Sirena Chilota, who according to Chilotes mythology take care of the sea.   The ship appears a blaze with light that glows in the dark and through fog and there is the sound of music and great revelry that comes from it.  As soon as anyone tries to approach and gets to close it is said to either disappear, turn into a seal or log, or sink beneath the wave to continue its journey.

The Invunche is the guard at the entrance to the Cueva de Quicaví which is the legendary witches’ cave where the Brujo meet.  He was said to have been stolen at birth and fed the flesh of the dead and cat’s milk and grew into a terribly ugly creature with one leg twisted behind his back. He is said to let out the most terrible and terrifying screams and anyone who is caught in his line of vision is instantly and eternally frozen to the spot.

Fiura is said to be the wife of the Trauco and haunts waterfalls and seduces handsome young men which sounds pleasantly errotic but unfortunately she is a short,  fat, ugly woman with terrible bad breath.  When the handsome young victim realises what he has done he is said to go mad. 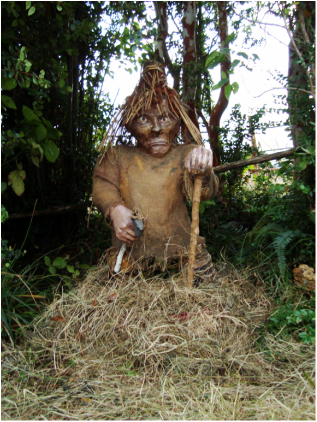 In the forests  that cover many islands legend says there is a strange, troll-like creature called the Trauco who is said to be the husband of Fiura.  It is reputed to have a twisted and deformed body and to be extremely ugly and wears a peculiar conical hat and dresses in rags and yields a stone axe or club. The Trauco hits trees with his axe or club as a way to advertise his sexual prowess.

Despite the disadvantages of his abnormal physical appearance it is said that young and middle-aged women find him irresistible, but no woman can resist his sexual attraction and he receives blame or credit, for unwanted pregnancies and the women are regarded as blameless.  The men of the islands fear the Trauco because his gaze can kill.

The Voladora is a messenger of the witches with the ability to shapeshift into a blackbird by the unusual technique of vomiting up her innards at night. The night is the only time the Voladora can travel.  She cannot be seen by its cover but her terrifying cries give away where she is and bring bad luck to those who hear them.  At dawn she must recover her innards or she will remain forever in the shape of a blackbird.
© 25/10/2015 zteve t evans
References and Attributions