By zteve t evans
Semerwater was created at the end of the last Ice Age when glacial debris and sediment dammed the valley causing the formation of a lake. Today it is the second largest lake in North Yorkshire after Malham Tarn.  The lake is half a mile long covering about 100 acres. The name Semerwater was first recorded in 1153 and is derived from the Old English for lake which is sae and mere which is lake and water.  It is a typical picturesque English scene that was the subject of numerous sketches by the artist J.M.W. Turner.  Windsurfers and boatmen use the lake and walkers and fishermen relax along the shores and it is a Site of Special Scientific Interest for nature lovers.
Semerwater, Yorkshire, UK 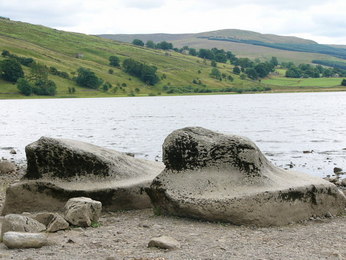 Although Semerwater is a sizeable body of water tradition tells that where the lake is situated today there was once a thriving and prosperous town. The legend tells how the town was visited by an angel who took the form of a poor old beggar man.  In the guise of the beggar man the angel went around the town begging for food and drink.  He begged in the streets and in the main market place but all the rich and prosperous citizens passed him by or looked the other way never once making an offering.  Next he tried begging from door to door but still not one of the well-to-do citizens would give him a crumb of bread or drop of water.  He moved methodically through the town from door to door but each time he was turned away with nothing often quite rudely.   There seemed to be no one in the town who had pity or kindness for a poor beggar.

Eventually he came upon the last home in the town which was situated on a hill. It was really nothing but a hovel but it was the home of a poor elderly couple.  Instead of turning him away they  took him in and shared the last of their bread with him and the last of their milk.  They apologised for not being able to give him anything better but explained it was all they had. The beggar was greatly touched by their kindness and generosity to him.  As he was about to leave he turned to face the town, standing suddenly tall with outstretched his arms he blazed with light and cried,

"Semerwater rise, and Semerwater sink, And swallow the town all save this house, Where they gave me food and drink."

Immediately the curse took effect and the land the town stood on sank and water filled the great hollow drowning all of the pitiless and uncharitable citizens.  The water rose up the hill towards the home of the poor elderly couple but stopped shortly before their front door leaving the couple unharmed.
Flood myths

There are other similar flood myths from other parts of the British Isles. Some such as the legend of Lake Bala in Wales  have a similar theme of divine retribution being wreaked upon the unrighteous.  Tyno Helig and  Cantre’r Gwaelod are also two Welsh legends of flooded lands though these were situated along the coast rather than inland like Semerwater and Bala.   There are also many other legends of divine retribution causing kingdoms and cities to be flooded or destroyed.  For example, Sodom and Gomorrah, The Great Flood,  Atlantis and many others from all around the world.

What is the truth?

Legends such as these have often been passed through the generations by word of mouth so the story becomes changed and twisted along the way.  As such it can be difficult or even impossible to know the truth.
It is known that humans were active around Semerwater in ancient times.  In 1937 when a drought drastically reduced water level an archaeological excavation revealed an Iron Age settlement on the lake’s bed and a Bronze Age spearhead has been found.  Evidence of human settlements from Neolithic, Bronze and Iron Ages found by archaeologists suggests a long period of human occupation around the lake. Could there be a grain of truth in the story with the legend being a distant echo of an actual flood event that has become distorted and changed through time?
© 21/01/2015 zteve t evans
References and Attributions