In medieval legend Corineus was held to be a descendant of the Trojans and a great warrior who became the founder and first Duke of Cornwall.  Geoffrey of Monmouth in his book The history of the Kings of Britain identifies him as the leader of a group of warriors descended from a group of Trojans who settled along the coasts of the Tyrrhenian Sea in exile after the fall of Troy.  In a dream Brutus had been told by the goddess Diana to seek out Albion which was populated by giants and make it his home.  Although the book was popular in its time it is not regarded today as a reliable history book.  This shows how attitudes change with the times and how legends are made, though some may call it fiction.  However, we will allow the reader to make up their own mind and look at the story Geoffrey tells about the founding of Cornwall by exiled Trojans. 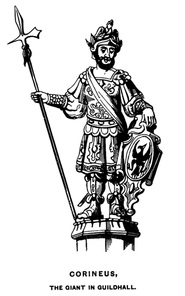 According to Geoffrey, Brutus was a descendant of Aeneas, a Trojan prince, and had freed many Trojans who had been enslaved in Greece after the fall of Troy.  He had become their leader and traveled far and wide with them having many adventures before meeting up with another band of exiled Trojans along the coast of the Tyrrhenian Sea.

The commander of these exiles was named Corineus who was a courteous and modest man who could offer good council but was renowned also for his courage, boldness and prowess as a warrior.   Brutus told Corineus of how Diana had come to him in a dream and told him to search for Albion and asked Corineus to join him. Corineus agreed and although he was a great war leader in his own right  when told about the dream and understood who Brutus was descended from he placed himself and his men under his command becoming second in command himself in the army of Brutus and joined the quest.

Corineus and his men were to give great service to Brutus in many battles and his people became known as the Cornish people after Corineus. Eventually, Brutus and Corineus set off with their army to find Albion. On their way they stopped off to replenish their supplies anchoring their fleet in the mouth of the Loire River of Aquitania.

Goffarius Pictus the King of Aquitania, received word of a great war fleet anchored in the Loire estuary.   In alarm he sent ambassadors with messages enquiring of their business and asking if they wanted war or peace.  On their way to the fleet the ambassadors ran into Corineus, who with two hundred of his men, was out hunting in the forests and demanded to know why he was hunting the King’s game in the King’s forest with out the King’s leave.   Corineus told them he would hunt game where he wanted with or without the permission of King Goffarius Pictus.  This enraged one of the ambassadors by the name of Imbertus so much that he ran towards Corineus and shot an arrow at him.  Corineus evaded the arrow and unfazed, killed the ambassador by splitting his skull with his own bow.  The other ambassadors fled back to Goffarius with the news of the death of Imbertus and the war-like company of men they had encountered.

King Goffarius raised an army and marched to attack the Trojans.  Brutus, getting word of the danger, orders the women and children to the safety of the ships ready to sail if things should go wrong.  Leaving behind enough men to protect and sail them he and Corineus with the main army march to meet Goffarius.

The ensuing battles are long and bloody with Corineus playing a major part in defeating the enemy.   At one stage he loses his sword while the battle is at its height but finds a great battle-axe with which he inflicts death and destruction upon the enemy and eventually the Trojans gain the victory.

Brutus and Corineus ravage Aquitaine taking treasure, weapons and supplies to their ships and putting all to the sword who would stand against them.   Despite the victory Brutus expected another attack from Goffarius and they came at last to a good defensible place where they decided to make a stand and built a fortified encampment.

Goffarius managed to escape and appealed for help from the twelve rulers of Gaul who sent him a great army outnumbering the Trojans three to one.   On discovering the encampment of the Trojans he arrayed his forces into twelve columns and sent them to the attack.  Brutus and Corineus had not been idle they had completed the fortifications of their encampment and had given orders to their men of how they should attack and how they should defend.

Goffarius with his greater numbers was confident of victory and the Trojans knew they would be hard pressed to even survive.  Nevertheless, the Trojans were disciplined and well marshaled and despite being disadvantaged in numbers threw back the attack and almost succeeded in routing the Gauls.   Goffarius rallied the his men and once again attacked the Trojans and now the superior numbers were beginning to tell. As day wore on the they were forced to retreat to their fortified camp. Goffarius besieged the camp intending to force the Trojans to either surrender and enslave them, or starve them, if he could not kill them in battle.

Corineus has a plan

When night fell Brutus called his captains to a council of war.  Their situation was dire and being so badly outnumbered and surrounded it seemed only a matter of time before they would be overwhelmed.  Corineus, as bold as ever, came up with a plan where he and his men would creep through the lines of the Gauls and hide in a wood behind them until daybreak.

When the Gauls attacked Brutus in the encampment, Corineus and his men would sally forth from their hiding and attack the rear, catching them by surprise.  Brutus agreed to the strategy and he and his nephew, Turonus would lead the men that remained defending the encampment while Corineus would lead the attack upon the rear of the Gauls.  During the cover of night Corineus and three thousand of his men made their way stealthily through the ranks of the Gauls to the cover of the wood beyond.

When dawn came Brutus and Turonus, who was second only to Corineus in military prowess, led the remaining Trojans into an attack on the Gauls.  Turonus fought bravely and furiously slaughtering many Gauls but he eventually was surrounded and slain.  Brutus later built the city of Tours where he was buried in his honour.  Nevertheless Brutus had caught the Gauls by surprise by initiating the attack. They had been expecting him to sit out a long siege and were caught by surprise. Brutus and his Trojans drove hard into their ranks forcing them back.

Then Corineus and his men entered the fight attacking the Gauls in the rear causing great confusion and havoc in their ranks.  The Gauls thinking another army had joined the fight retreated but their retreat quickly turned into a rout as Brutus and Corineus caught them between the hammer and the anvil.   The Trojans chased and harried the Gauls looking to utterly defeat them. Brutus and Corineus soon became aware that although they had won great victories against them, the Gauls could field even more armies against them and their own numbers had been diminished in the fighting.

The Trojans leave for Albion

Brutus and Corineus decided to return to the ships rather than risk getting cut off and continue the journey to Albion.  They filled the ships with great supplies of provisions, weapons and treasure and set sail for Albion’s shores, landing at a place called Totnes. 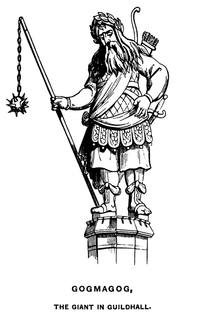 In those days, as the goddess Diana had told Brutus in his dream, there were many giants living in Albion. Brutus and his men slew most of these but kept alive the leader of the giants, whose name was Gogmagog to face Corineus in a wrestling match. The match took place at a place that was near to where the modern port of Plymouth is now.  Corineus defeated Gogmagog by throwing him off nearby cliffs killing him.

Curiously, Corineus and Gogmagog were a part of the Lord Mayor of London’s annual show.  Two carved wooden figures representing Corineus and Gogmagog were displayed in the Guildhall of the City of London. These had been carved in 1709 by  Captain Richard Saunders to replace the original figures had been made of wicker and boarding.  These two figures later became known as Gog and Magog but both were destroyed by German bombs during the Second World War and were subsequently replaced by new carved figures in 1953.
© 12/02/2015 zteve t evans
References and Attributions