Japanese Folktales: The Bamboo cutter and the Moon-child

Curated and Edited by zteve t evans
This is a version of story from 10th century Japan from various sources that tells how an old man who made his living cutting bamboo found a tiny baby girl inside a stalk he was cutting. He and his wife had not been fortunate enough to have children of their own so he decided to take the baby home to his wife to bring her up as their own.   As might be expected with a baby being found in such extraordinary circumstance this was no ordinary child and there were strange powers involved that would later reveal themselves to the couple’s sorrow. 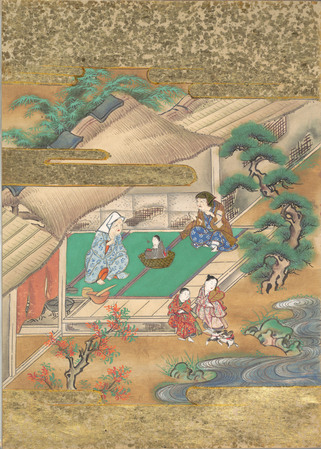 There was once a man named Taketori no Okina (the Old Man who Harvests Bamboo) who made his living by cutting bamboo.  Although he was married he had no children although he and his wife would dearly have loved one.  One day while walking through the bamboo forest he found something very strange.  It was a shining stalk of bamboo and he stopped to have a closer look.  After spending all his life cutting bamboo he had never seen a stalk of bamboo like it.  Intrigued, he cut it open to see what was making it shine.

To his astonishment and joy there was a tiny baby girl no bigger than his thumb inside.  In wonder and delight he hurried home to show his wife who was also pleased and delighted and they both fell in love with her.  They named the baby girl, Kaguya-hime which means princess of bamboos scattering light.  Together and with much love and devotion they raised the tiny girl as their own.

Ever since  the day Taketori no Okina had found Kaguya-hime every time he cut a stalk of bamboo he found a small nugget of gold inside.   Very soon he became very rich and his daughter grew very fast into an extraordinarily beautiful woman of more normal size.  To begin with he and his wife had tried to keep the existence of Kaguya-hime secret from outsiders, but as is often the case with the extraordinary word spread of her beauty.

Somehow word spread far and wide and it reached the ears of five princes who all of arrived at the house of Taketori no Okina together with all declaring their undying love for his beautiful foster daughter.   They begged him to ask Kaguya-hime to chose between them for a husband.  Taketori no Okina was reluctant to speak to his foster daughter about their request because he did not want to lose her to them.  She was also reluctant to talk to them, politely saying she was not ready for marriage yet and showed no interested in any of them.  Nevertheless, they were obsessed with her beauty and persisted in asking her to chose between them.  Everyone of the princes was handsome, rich and desirable and most women would have given anything to marry one of them but not Kaguya-hime.  The more she politely refused the more determined they became. Eventually hoping to discourage their attentions she thought up five impossible tasks that each one was allotted and was complete to win her hand. 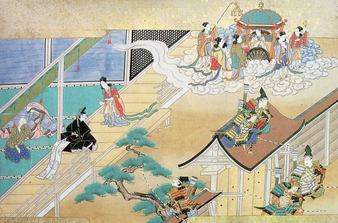 The first prince was told he must go to Nepal and bring back to her the begging bowl of Buddha.  The second was told he go to the fabled island of  Hōrai where jewels grow on trees like fruits and bring her back a jeweled branch from a tree.   The third was given the task of bringing back the robe from the mythical fire-rat of China and the fourth had bring back a jewel studded collar from the neck of a dragon.  The fifth prince was given the task of to bring her a cowry shell born of swallows.

The first prince charged with bringing back the begging bowl of the Buddha realising it was impossible went off and came back later with an ordinary bowl which he tried to pass off as the Buddha’s.  Kaguya-hime seeing that the bowl did not shine with holy light saw through his deception and he failed.  The next two also attempted to deceive Kaguya-hime with fakes but she saw through them and failed them.  The fourth ran into a terrible storm and gave up his quest and the fifth was killed in attempting it.

With the failure of the five princes word reached the Emperor of Japan about the beauty of Kaguya-hime and he went to see her for himself.   He too fell head over heels in love with her and begged her to marry him.   Being Emperor she could not impose an impossible task on him. Instead, she politely told him that she could not marry him as she was not of his country and live in his palace with him.  Kaguya-hime stayed friendly with the Emperor and kept in touch with him and each time he requested her hand in marriage she gently refused explaining that she was not of his country.

During the summer months her foster parents saw a change come over their beloved foster daughter who had suddenly taken to staring at the full moon with tears in her eyes.
They became greatly worried about her and although they asked she could, or would not, tell them what was upsetting her.  She behave strangely and at times seemed distant and vacant.  Her foster parents were very worried and supported her the best they could. At last she told them a very strange story which worried them even more. 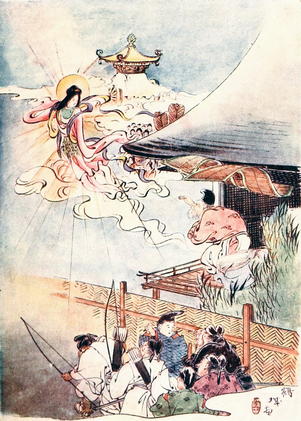 Kaguya-hime told them that she was really not of this world but her real home was on the Moon where she was a princess and that she must return there to join her people.  She said she had been sent to earth to learn a lesson.  She had done this and her people now wanted her back. She explained it was the people of the Moon who had sent the gold that her foster father had kept finding in the bamboo stalks to pay for her keep and as a reward for taking care of her.

Taketori no Okina and his good wife did not want to lose their foster daughter and asked the Emperor for help.  He sent armed guards to prevent them taking her.  When  the day came when the Moon people came for Kaguya-hime a group of Heavenly Beings appeared at the home of Taketori no Okina politely requesting to see Kaguya-hime.  The guards challenged them but they were blinded by a strange light that prevented them from seeing and acting until she was gone.

The old couple begged the Moon people not to take their foster-daughter.  From out of the light one stepped forward and told them that they had sent Kaguya-hime to earth because she needed to learn an important lesson and that they had been chosen as worthy to care for her. Now she had learnt the lesson and it was time for her to return to her people.

Kaguya-hime told her foster parents she would always love them and thanked them for taking care of her and she gave them her robe to keep as a memento.   She then attached a small vial of the Elixir of Life to the letter and gave it to of her foster parents and asked them to give the letter and vial to the emperor.  As she kissed her foster parents goodbye a robe of feathers was placed around her shoulders by the leader of the Moon people and she forgot all about her life and time on earth. All the love, compassion and bitterness she felt at having to leave fell off her and never came back to her and she left with her people for the Moon.  They took her back to Tsuki-no-Miyako the city of the Moon leaving her weeping foster parents.  Her poor foster parents never got over the shock of losing her and they both fell sick and wasted away dying together.

The captain of the guards took the letter and vial back to the Emperor who was overwhelmed by sorrow on reading the letter.  The Emperor asked his advisers which was the nearest mountain to Heaven and they told him it was the Great Mountain in the Suruga Province. The Emperor wrote a letter to Kaguya-hime and ordered them to climb to the top and burn the letter hoping that it might reach her.  Along with the letter he told them to burn the Elixir of Life as he had no desire for immortality without her by his side.  After that the Great Mountain became known as immortality which translates as fuji in the Emperor’s language  According to the legend smoke from Mount Fuji was seen floating skywards ever since.
© 3101/2016 zteve t evans
References and Attributions