Mystery, Murder and Magic at the Rollright Stones

by zteve t evans
​The Rollright Stones are a group of three ancient monuments dating from the Neolithic and Bronze Ages, situated along the borders of Warwickshire and Oxfordshire in England.  The complex is made up of three different sets of standing stones individually known as the King Stone, the King’s Knights and the Whispering Knights.  Their original purpose and meaning have been long lost but such is the enigmatic and inscrutable nature of the stones that many myths, legends and traditions evolved around the site. Stories of witches and kings, petrification spells, death and madness, failed attempts at moving the stones, fairies living under the stones, fortune telling and superstitions and many more such traditions add to the mystery and magic of the Rollright Stone Complex. 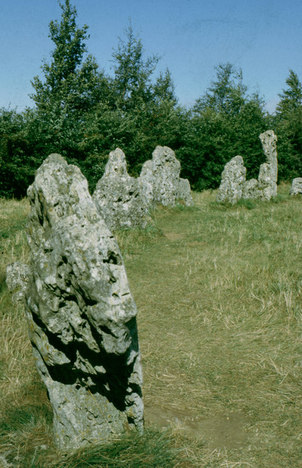 A few of the Rollright Stones Attribution: Row17 - CC BY-SA 2.0
Death and Madness

It may be that the promotion of  tales of death, madness, and the supernatural had a purpose.  Some think they were designed to keep unwanted visitors from seeing things they should not see.  It may be that the stone circle was a meeting place for witches or another group of people who did not want to be witnessed doing whatever it was they were doing.  It may also have been a direct attempt by the Christian church to dissuade people from visiting such places.

The Witch and the King

Past attempts to move the stones or cause damage to them has also brought bad luck upon the perpetrators. One Banbury man was said to have chipped a piece off one of the stones.  When he tried to leave in his horse and cart the wheels were locked solid preventing him from moving.  A soldier is said to have chipped a piece from one of the stones and taken it to India where a bout of typhus killed him.

One farmer from nearby Little Rollright wanted to build a bridge over one of his streams and a capstone from the Whispering Knights seemed to him to be just the thing he needed.  To haul the capstone it took twenty horses pulling downhill and two men were killed in the process.  But even when the capstone was placed across the stream the farmer still experienced problems.  Strange unearthly noises came from the stone and each morning he would find it laid on the bank instead of over the stream.  Such eerie goings on persuaded the farmer to return the stone to its original place.  This time, it only took one horse to haul the stone up the hill instead of the twenty needed to haul it down.

According to tradition, it is said to be impossible to count the number of the stones that make up the King’s Men.  One legend says that there was once a baker who claimed he could count them.  In order to do this, he baked a batch of loaves and placed one on the top of each stone as a marker.  But when he tried to count them he found that some loaves had disappeared said to have been taken by the fairies or the devil himself.  The legend says,

"The man will never live who shall count the stones three times and find the number the same each time."

In complete contrast, it is also said that anyone who thrice counts the same number will have their heart’s desire fulfilled. It is a long-held belief that the stones are notoriously difficult to count though it is unknown why, but they have actually all been counted and documented. 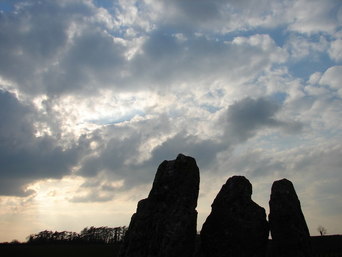 There is a tradition that underneath the King Stone and the King’s Men there are holes where fairies are supposed to live.  They are said to emerge from these holes through an entrance in a bank at midnight to dance by moonlight around and in between the stones. If the entrance is blocked then by morning it will be mysteriously cleared.

At similar sites to the Rollright Stones, there are similar reports and another legend says that there are tunnels that run between such sites inhabited by little people.  Humans who have entered into such places have returned to find that the time in the outside world has passed much swifter.  Where they thought they had been away for days when below ground, while above the ground years have passed and sometimes vice-versa.

Perhaps a distant memory of when the fairies were pagan gods, or spirits, appears with the tradition of leaving them a small present or offering.  There are also tales of children who would not go near the Rollright Stone Circle and who were frightened of them.  Some without being told of the reputation of the circle, even have nightmares where they enter a cave beneath the circle and see a young woman transformed into a snake.  Some people think that children have an intuition or sense that is lost with maturity about such things, which may be designed to keep them safe.

It was well known even as early as Tudor times that the Rollright Stones were a meeting place of witches, though it is likely they were in use much earlier.  Perhaps the stones exude some kind of power that along with their ancient pagan origins draws people to them.

One story tells of the murder of an 80-year-old woman from Long Compton who was accused of being a witch and was murdered.  Long Compton is only about one mile from the stone circle and there is a tradition of witchcraft taking place in the area.  One alleged incident occurred in 1875 when a man called James Heywood believed he had been bewitched by an old woman known as Mistress Tennant and murdered her.  It seems that Mistress Tennant kept, or had, toads in her garden, which was seen as evidence of her being a witch by Heywood. He was detained and confessed to the crime declaring he knew of sixteen other witches in Long Compton and that he would like to kill them all.

At the time one of the tests to determine if someone was a witch was to weigh their heart against the Bible and the defendant asked that he may too be judged in this way. Whether this was done or not is not told but Heywood was found to be insane and sent to prison in Warwick.  In jail, Heywood steadfastly refused all food and water believing that he was bewitched and gradually died.  Some think he may have been influenced by a traditional local saying,

There is a tradition that the stones promoted fertility and the King Stone was supposed to be particularly potent in this.  At midnight, young women would touch it with their breasts.  In 1743, William Stukeley told how on a special day of the year young men and women were supposed to gather there to “make merry with cakes and ale.”  Women and girls were said to put their ears to the Whispering Knight Stones who were said to whisper the name of future husbands.