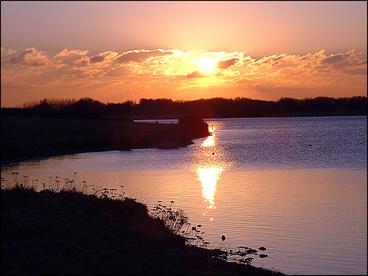 Not far from Porthcawl, Bridgend in Glamorgan in South Wales lies Kenfig Pool that according to legend has a drowned town beneath its waters.  Kenfig Pool is now part of a Kenfig National Nature Reserve which is designated a Site of Special Scientific Interest and also a part of an important active sand dune system along the Glamorgan coast.  The original borough of Kenfig was a place of some significance centred around or near Kenfig Castle.  Both castle and town became buried by shifting sands during the late medieval period and the residents resettled further inland.

The drowning of Kenfig

According to local tradition the Kenfig Pool is said to be fed by seven springs and is bottomless. It is actually known to be about 12 feet deep.  There is also supposed to be a whirlpool that drags boaters and swimmers to their doom called Black Gutter.   Another  legend  tells that where the lake now stands there was once a thriving town that sank and became covered by water.

There are a number of variations and versions of the legend but generally they say that the daughter of a local lord was looking for a husband and she fell in love with a poor man of ordinary birth.  Her father was against her marrying  him because he was poor and he was below her station. Her lover, seeing her father wanted his daughter to marry a man of noble birth with money and he had neither resolved to leave the town to find his fortune.   Many months later he returned and along the way met the lord’s rent collector carrying a sizeable amount of money he had collected from his lordship’s tenants. 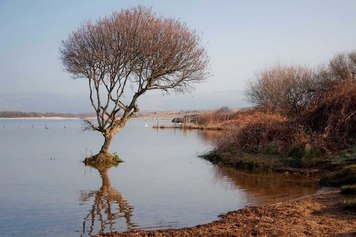 The next morning the people who lived in the countryside went to see what damage had been done to the town but were shocked to find that where the town once stood there was now a huge body of water.  All that could be seen of the town were three chimneys sticking out of the middle of the water issuing clouds of black smoke.  According to local tradition these are said to resurface before bad storms that cause the deaths of mariners from the locality.  Sometimes it is said that the sad tolling of the church bells under the water can be heard floating across the water.

This legend has similarities to that of the the Lake Bala and Tyno Helig legends.  Both are flooded and threatened with vengeance in later generations.  Tyno Helig was inundated by the sea and murder and robbery were committed by a young man  who wanted to marry the lord’s daughter.  The town of Bala became covered by water creating an inland lake.
© 27/01/2016 zteve t evans
References and Attributions