The sudden appearance of a strange and diabolical character nicknamed Spring-heeled Jack caused a sensation in Victorian Britain.   From 1937 reports of  a villain dressed in a strange costume, with strange powers who sprang out of the darkness of London’s streets and alleyways to attack and terrify innocent, unsuspecting victims spread throughout London.   Soon news of his attacks had spread beyond London with alleged incidents being reported across Victorian Britain.  Who he was, where he came from, what he was and what his motives were never discovered but for a time he terrified Victorian society.

This article takes the reader through the dark streets and alleys of Victorian London to see how his campaign of terror began and describes how his diabolical appearance frightened many of his victims to death, The different theories to his identity and to who or what he was will be presented before concluding with a few speculative ideas for the reader to consider for themselves. 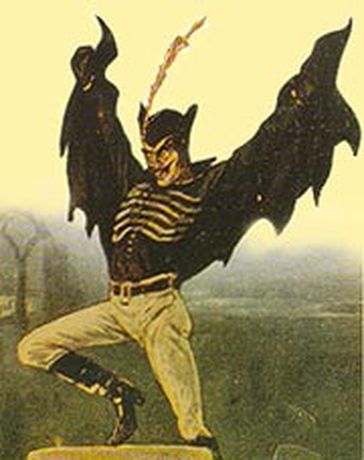 Victorian London, even in the day time, was a dangerous place for the lone pedestrian to wander about in.  There were labyrinths of narrow streets and alleys full of hidden corners where thieves and cutthroats lay in wait for unsuspecting victims.

After dark the streets and alleys were dimly lit at best, though many had no lighting at all making it a doubly dangerous and treacherous place.

From these streets and from these times many strange and frightening urban legends arose. One of the strangest and most frightening of these legends evolved from a series of attacks on people carried out over a number of years by an unknown assailant who was never caught.  The attacker became known as Spring-heeled Jack after the amazing and bizarre way he escaped pursuers.

He literally sprang into public attention in October of 1837, when he attacked a girl walking through the Clapham Common area.  Her name was Mary Stevens and she had been visiting her parents. As she walked through Clapham Common a strange, dark, figure sprang out of the darkness at her. He grabbed her and held her so tightly that she could not move, tearing and ripping at her clothing at the same time.

The victim said that his hands were like metal claws and were "cold and clammy as those of a corpse."  As he held her immobile he kissed her face.  Panic stricken she screamed and the attacker sprang off into the night. Her screams roused several local people who rushed to her aid.  They searched the area, but no trace of the assailant could be found.

The following day there was another incident where a strange figure sprang into the path of a passing coach and horses, terrifying the horses. The coach crashed and the driver was badly injured.  According to the testament of several witnesses the perpetrator escaped by springing over a 9 foot high wall, while making a shrieking, babbling sound of laughter.

More AttacksThese two attacks were just the first in a series of incidents many of them with much more serious consequences for the victims. As the attacks spread across the country they were frequently reported in magazines and newspapers of the time and his infamy spread. Each attack seemed to magnify his crimes. As interest in him grew he eventually had a number of works of fiction and plays written about him and his exploits 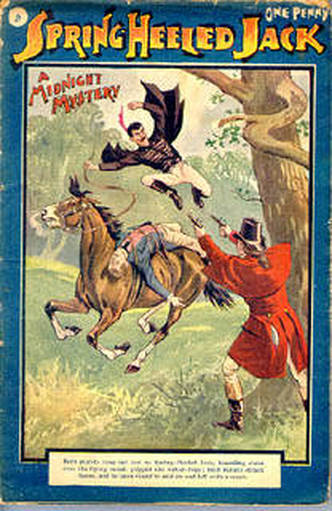 He was described by witnesses as having a terrifying appearance possessing red, burning eyes and having metallic, claw like hands. The clothing he was reported as wearing was also bizarre and added to his reputation.  On his head he wore a helmet and his body was covered by a white, skin tight garment, made of material resembling oil skin.

He was said to have a tall, thin physique and carried himself in the manner of a gentleman and spoke good English.  Several witnesses claimed he could breathe blue and white flames from out of his mouth. Witnesses also reported that as he sprang off making his escape he made a strange, high pitched, babbling, laugh.

Several of his victims seemed to have suffered some kind of fit that needed a lengthy recovery and some of his victims had died of fright. With such diabolical and fantastic attributes, along with the overly enthusiastic reporting of the press, he soon became an urban legend. The incidents were given huge publicity by the press and the attacker became known as Spring Heeled Jack due to his extraordinary leaping abilities.

The attacks were treated seriously and a public session was held by Sir John Cowan, Lord Mayor of London to discuss what could be done to apprehend the perpetrator. During the session Sir John revealed he had been sent an anonymous letter that claimed it was all a series of pranks by a group of young aristocrats who had done it for a bet. 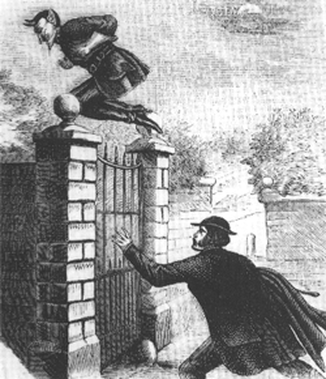 The main suspect was a young Irish aristocrat named Henry de La Poer Beresford who was the 3rd Marquis of Waterford.  He had a reputation for drunkeness, brawling, playing sick jokes, vandalism and was often said to be disrespectful towards women.  The Marquis was known to be in London with a group of friends when the incidents were first committed.  However, the Marquis married and returned to County Waterford to live a relatively quiet life.  He was killed in a riding accident in 1859 and Spring Heeled Jack was to strike many times after his death.

Despite the frequency of the attacks over such a long period of time when he was at large, no one was ever apprehended, or positively identified as Spring Heeled Jack.

Many skeptical investigators dismiss the phenomenon as mass hysteria whipped up by the press who were out to sell papers.  Another theory is that it was all the work of one, or more persons with a very strange sense of humor. Looked at in this way the Marquis of Waterford and his aristocratic friends may look more culpable.  His friends could have continued the attacks after his death. This would also fit with the anonymous letter received by the Lord Mayor of London.

Was There A Paranormal Explanation?

Other researchers look to the paranormal for an explanation.  In Victorian London there were many reports of ghosts and supernatural occurrences. There were also many reports of human-like figures, or ghosts, which stalked and preyed upon people walking alone at night and assaulting them.

His first recognized attack by happened in the London area in 1837. Later reports of attacks attributed to him came from the Midlands and as far away as Scotland.  The last reported attack happened in 1904 in Liverpool. With each attack he seemed to take on more superhuman and extraordinary abilities and his bizarre and frightening appearance.

Who, or What, was Spring Heeled Jack?

Victorian society had a reputation or being matter of fact, no nonsense, unemotional and even dour, and yet, Spring Heeled Jack had a huge effect on them.  Was Spring Heeled Jack blown out of all proportion by the press of the day, or was it all a prank by a bunch of young pampered aristocrats with nothing better to do? Could it have been a series of copycat incidents, or, was there really something else out there stalking the dark alleys and streets of Victorian London and materializing in other parts of Britain?
© 19/01/2015 zteve t evans
References and Attributions