Sunken Bells:  The Legend of the Kentsham Bell 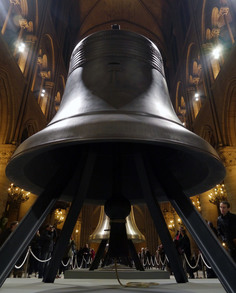 According to one legend, the greatest bell that was ever brought to England was the Kentsham Bell.  Where Kentsham was is not told in this tale but what is told is that the parishioners of Kentsham had great pride in their hometown.  They decided that the church of their parish should have the biggest and finest bell in all of England.  However, at this time in history there was no bell-making foundry in England that could produce a bell on the grand scale they desired and so they had to give the commission of the bell to a foreign foundry that cast the greatest bells in all of Europe.

It so happened that other parishes around England at the time decided that they too would like a fine bell to enhance their churches though they were more modest in their aspirations.  Therefore to save on costs,  a foreign foundry was awarded the commission of casting all four bells.  In due course, four fine bells were made that were named Great Tom of York, Great Tom of Lincoln, Great Tom of Christchurch and finally Great Tom of Kentsham, the largest and finest bell of all.  They were all transported from the foundry on the continent together on the same ship over the sea to England.

It had been a mighty difficult task getting the bells aboard the ship, especially Great Tom of Kentsham and now in England, they all had to be unloaded and delivered.  Carefully and slowly, supervised by the ship’s captain the men removed Great Tom of York, then Great Tom of Lincoln followed by Great Tom of Christchurch and sent them safely on their ways to their respective destinations.

Then they were faced with the task of removing the last and greatest bell from the ship and delivering it to its final destination.  The captain diligently set about the difficult and delicate task of moving Great Tom of Kentsham to the shore.  To do this he directed his men  to hoist it into the air and swing it off the boat onto a cart waiting on the side of the dock.  It was a tense and difficult job and the bell was very, very, heavy.  Inch by inch under the captain’s intense scrutiny they raised it high in the air.  As they were swinging the great bell to the shore the captain, who was feeling intense pressure, uttered a profanity to relieve his tension.  Just as he did so Great Tom was being held high in the air above the water between the ship and the shore by a single rope.  The rope snapped and the great bell fell into the water, sinking quickly to the bottom of the sea.

There was a great uproar and the captain and his men were dismayed for surely it would cost them their pay and maybe more if the great bell was lost.  Not knowing what else to do he went to ask the advice of the local Cunning Man who gave him the following instructions:

"Take six yoke of white milch-kine which have never borne the yoke, and take fresh withy bands which have never been used before, and let no man speak a word either good or bad till the bell is at the top of the hill."

So the captain found six milk-white cows that had never before been set to the yoke.  He harnessed them as had been instructed and sent a swimmer down to harness them firmly to the bell. Fortunately, the water was not too deep and the withy-bands were firmly fixed to the bell.   When all was ready the captain gave the signal and the cows heaved with all their might and slowly and surely Great Tom was brought to the shore and no one spoke a word in the process.  Once it reached dry land the next task was to haul it uphill to its final destination.

Still not a word was said and at the captain's signal the cows began to haul it with great effort up the hill.  All the way up the slope loud groans and moans came from the bell as if it were protesting at the process.  Concentrating firmly on the task the captain using signals urged them on and with great effort, they slowly drew near their destination.

Now, the captain had been distraught when the profanity he swore had been the cause of Great Tom falling into the sea and now he was feeling elated that he had overcome that mishap and he sang out with joy,

"In spite of all the devils in hell, We have got to land old Kentsham Bell."

No sooner had those word left his mouth when the withy-bands broke and Great Tom of Kentsham rolled back down the hill.  Faster and faster rolled the great bell making a terrible clanging all the way.  It rolled off the dockside and into the sea and continued rolling and clanging out into the depths of the ocean.

Since that day, not one single soul has ever laid eyes upon it.  Tradition says that it is still often heard tolling away under the sea and it may be that if you go there you may hear it too.  I fear the captain did not get paid that day but perhaps it taught him that there are times when it is best to say naught let alone utter profanities.  The people of Kentsham did not get the finest bell in all of England and perhaps there is a lesson in this tale about the dangers of hubris.

What do you think?
© 17/10/2016 zteve t evans
References, Attributions and Further Reading