Introduction to Cornish folklore and legend

By zteve t evans
Cornwall, UK
Cornwall in the British Isles is rich in traditional folklore, legends and mythology greatly influenced by its historic and cultural connections. Celtic, Saxon, Viking, Christian and many other influences are interwoven to create marvellous legends and stories.  This page serves as a brief introduction to the rich world of Cornish folklore and legend.  Other pages on this site will look into the legends and folklore more closely offering interpretations and insights. 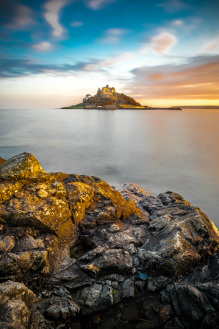 It is a landscape that inspires tales of wonder and mystery. The coastline is rugged and washed by seas that can be untameable and unpredictable. Tales of mermaids, smugglers and pirates abound around the small fishing villages and towns dotted around the coastline.

The interior can be wild with a rugged grandeur that gave birth to many tales of giants,  Bucca, piskies or the 'pobel vean.'  Many Cornish folktales such as ﻿Jack the Giant Killer﻿ have influenced modern culture.  Cornwall is strongly associated with the legends of King Arthur who was reputedly born at Tintagel, the court of King Mark of Cornwall reputed to be his uncle. There were also the two famous Cornish lovers, Tristan and Iseult.

The Sea around Cornwall

Surrounded by sea on two sides Cornwall has strong maritime traditions and is renowned for its links with fishing, smugglers and pirates.  These activities thrived for many centuries up to the end of the 19th century.  Along its rugged and jagged coastline there are many sheltered places to weigh anchor such as hidden creeks, beaches, coves, and caves.   In such places smugglers and pirates could hide or unload and store their booty. Often smugglers and pirates were aided and abetted by local fishing communities, possibly for fear of retribution, but also because smuggling and piracy supported a strong, though secretive, underground economy for poor people. 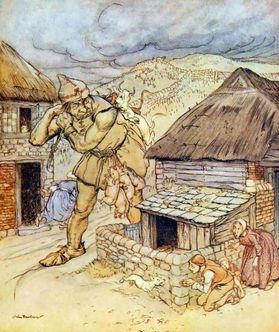 Cornish folklore has evolved it own set of legendary creatures such as knockers, buccas, piskies and giants, to name a few. Tin mining in Cornwall is a centuries old tradition and many of these creatures are thought to have originated as a supernatural explanation of the frequent accidents and cave-ins that killed and injured many miners. It may be that the oxygen starved minds of the miners gave rise to such creatures as they struggled to the surface.  The knocker or bucca is similar to English and Scottish brownies and Irish leprechauns.

Some accounts describe them as being about two feet tall and although grizzled they are not misshapen. They seem by all appearances to be rather like small human beings even dressing in similar clothes to miners. They are mischievous and are thought to steal the tools or food of miners that has been left unattended.  To appease their malevolence a small item of food such as the crust of a pasty would be left for them.

Giants play an important part in Cornish folklore. There are many Cornish landmarks that are said to have been created by giants or associated with them.  These may be found all over Cornwall from the barren granite rocks and wild rugged landscape of Bodmin Moor, to the dramatic windswept cliffs and coves around the coastline.

The tiny island of St Michael's Mount was said to have been built by a giant named Cormoran and in some versions of the tale with the help of his wife. Cormoran used to stride across the narrow sea channel separating the island from the mainland and raid the local farmer's sheep and cattle.  He was said to be the first victim of Jack the Giant Killer who was the son of a local farmer.  Jack lured Cormoran into a hole he dug which brought him down to Jack’s level enabling him to kill him.

Dozmary Pool is associated with many Cornish legends and folktales.  In Arthurian legend it is the place where Sir Bedivere threw King Arthur's sword, Excalibur, where it was taken by the Lady of the Lake.

In Cornish legend Jan Tregeagle, reputed to be the wickedest man in Cornwall, made a Faustian pact with the devil who supplied all his desires in exchange for his soul.  When the time came to pay the devil Tregeagle did not want to pay and appealed to the Church and the Saints for help. With the remote chance that on Judgement Day he would receive a pardon he was given the hopeless task of emptying the pool to prevent the devil from dragging him off to hell.  The pool was believed to be bottomless and Tregeagle was given a conch with a hole in it to work at his task until Judgement Day when he would have to answer to the Almighty.  However, one night during a powerful storm he dropped his conch stopping the work. This gave the devil the chance to try and capture him. Tregeagle leapt across the pool fleeing across the moors with the devil's hounds and demons hot on his trail.  He made it to a nearby church where he was given further tasks he had to work at until Judgement Day. 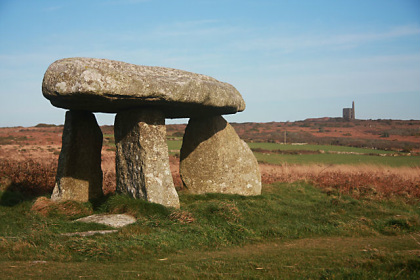 Cruel Coppinger was an infamous smuggler, pirate and all round criminal in Cornish folklore and legend.  He was said to have swum ashore during a terrible storm when his ship was shipwrecked off the Cornish coast. Coppinger was said to be a huge terrifying figure of a man who imposed himself on a woman and her family and eventually married her.  He set up smuggling and pirate operations and was renowned for his cruelty.  When his wife’s father died he threatened to tie his wife to the bed and whip her unless her mother signed over the house and money to him which she did.

He was said to have killed or had killed Revenue Officers trying to arrest him and any local man who witnessed his activities was forced to serve aboard one of his ships for the rest of their life. He had his own ship built called the Black Prince and played a deadly game of cat and mouse with the Revenue Officers and once led one of their ships into a cove where it became wrecked.

He had a son who was born a deaf mute and local people believed he had no soul.  According to tradition the body of a young boy was found at the bottom of a cliff.  Coppinger’s son was seen at the top laughing with glee and looking down on the body.

Coppinger eventually was forced to escape the Revenue Officers during a storm.  When trapped in a cove by them he rowed a boat to one of his ships and set sail into the storm and was never seen, or heard of again.

The beast of Bodmin

The Beast of Bodmin is said to be a huge black cat-like creature that roams the moor.   There have been many reported incidents throughout the ages and some alleged sightings.  Sheep and cattle have been found dead on numerous occasions seeming to have been mauled by a huge predator.

The Doom Bar of Padstow

The Doom Bar is a bank of sand that lays in the sea just off Padstow harbour.  According to local legend it was created by a mermaid with her dying breath after she had been shot by a sailor.  There are many different versions of the story so details vary.  In some versions the mermaid would guide ships up the estuary to Padstow harbour.

In other versions she would visit or spy on ships in the harbour.  Other versions say that she would sit upon a rock in Hawkers Cove.  There she met a man and they fell in love with each other.  She tried to lure him beneath the sea to live with her.  Possibly fearful he would drown he escaped shooting her in the process.  Another story tells how a man called Tristram Bird fell in love with her and proposed marriage.  When she refused he flew into a rage and shot her.  In another story she was shot by a man named Tom Yeo who mistook her for a seal.

With all of the different versions the final denouement is that with her dying breath she issues a curse which causes the harbour of Padstow to become unsafe or desolate.  Her curse caused great storm to brew up sinking or destroying many boats and creating the great sand bank that is now named the Doom Bar.

Another legend concerning mermaids is the Mermaid of Zennor whose form can be seen in the church of Zennor.

The Ding Dong mine

Not far from Lanyon Quoit, a Cornish dolmen, or megalithic tomb, is the Ding Dong mine.  Even from ancient times Cornwall has been an important place to trade for the tin which was mined there. Merchants came from Phoenicia, Greece, Roman and other places to trade for the valuable ore. One of the oldest tin mines in Cornwall was the Ding Dong Mine which is now unused.

Joseph of Arimathea and Jesus

Local Cornish legend tells that Joseph of Arimathea a merchant who was said to have had trade links with Cornwall and visited on business.  He was said to have been a disciple of Jesus and possibly a relative of his.

Cornish legend says that he also brought with him a young Jesus who preached to the local miners of the Ding Dong Mine.  Unfortunately no evidence exists to support this claim. He was also said to be the keeper of the Holy Grail which is said to be hidden in Chalice Well. He is also     associated with Glastonbury Tor, Somerset, where he is said to have thrust his staff into the ground where it took root and grew into the Glastonbury Thorn.

From the small fishing village of Mousehole becomes the legend of Tom Bawcock and Stargazy pie.  The legend tells how Tom put his life at risk by going out to sea in a storm to fish but managed to catch enough fish to feed the entire village.  His entire catch was put into a huge pie which was called Stargazy pie.

There are many petrifaction legends in the British Isles where people are turned to stone as punishment and are often used to explain the meaning of  stone circles or standing stones.  A Cornish legend tells of the Merry Maids stone circle of St Buryan.

The story says that the nineteen maidens were dancing to the tune of the two pipers one Saturday night. The pipers hearing the church clock of St Buryan strike midnight realised It was Sunday and tried to escape and ran off but it  too late and they were turned into two megaliths north-east and a little way up the hill from the stone circle.  The nineteen maidens were caught on the Sabbath dancing in a circle and were also turned to stone.

These are just a few examples of the wonderful myths, legends and folklore that abound in Cornwall and that can be found on this site.  It’s a place where people combine history with the land, sea and everyday life, to create a magical realm for the living.
© 20/01/2015 zteve t evans
References and Attributions