Cornish Folklore:  The Witch of Treva 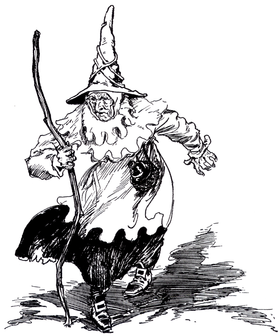 There was once a an old woman who was deeply skilled in the arts of necromancy and lived in a tiny hamlet called Treva in Cornwall.  She could make powerful, spells, incantations and charms and people in the neighborhood were terrified of her.

Nevertheless, although the local people held her in fear and awe her husband remained singularly unimpressed by her witchery and refused to believe in such things.  Instead he was more concerned about the housekeeping and the cooking especially when he came home from work when he would demand his dinner the instant he came in.

One day after a hard day’s work he came home looking forward to a good dinner which he expected to be cooked and ready, on the table for him to tuck into as soon as he walked through the door.  Imagine his shock and annoyance when he discovered there was no dinner.  In fact there was no meat, no vegetables or potatoes or any other kind of food in the house at all.  He was very, very angry and demanded to know why there was no meat or food of any kind in the house.

“Can’t get meat from bare rock!,”  his wife answered calmly telling him, “‘tis wrong to give into anger - hard words won’t butter parsnips!”

“What good be your fancy spells if you cannot rustle up a sausage, it will be the death of you if you do not find me some meat and dinner quick!”  he angrily told her. Then he sarcastically challenged her telling her if she could put a meat dinner in front of him within half an hour then he would believe in her great spells and power and would for all time be submissive to her will.

This was a tall order indeed for the nearest place she might find meat in those days was the market town of St. Ives a good five miles away.  Still the woman confidently put on her cloak and bonnet and began the journey.  Her husband watched as she walked out of the door, down the garden path and out of the gate.  He then watched her walk down to the bottom of the hill where she placed herself on all fours on the ground.  To his absolute astonishment she disappeared and in her place sat a huge hare.  Jumping up the hare ran off down the road towards St. Ives at incredible speed. 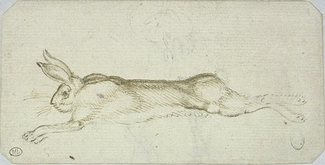 Running Hare - Public Domain
Her astonished husband watched as it disappeared over the next hill on the road to St. Ives.  With no food in the house he settled down thinking of how he would punish his wife once she had failed which he was in no doubt she would.  To his surprise less than half hour later with a plate of good meat, potatoes and vegetables she walked through the door and placed it on the table ready for him to eat, which he did.  But, from that day onwards he lived in fear of his wife and was completely submissive to her will until the day she died.

Now even witches die and die she did a few years later and it was said to be a most terrible death.  It was said that as she lay dying the room was full of demons and evil spirits and the shrieks and cries she made were terrible until death finally took her.  The locals knew when she had died because a black cloud floated over her house while elsewhere and all around the skies were blue and sunny.

At her funeral her coffin was carried by six reluctant local men.  As they bore her coffin from her home to the church, halfway between, a hare sprinted out of the hedgerow and jumped right over the coffin.   Understandably this startled and frightened the men and they dropped the coffin in the road and ran off.   The parson managed to persuade six others to take up the coffin and the funeral procession continued.

As they proceeded towards the church they had not gone far a most strange thing happened.  The hare suddenly appeared out of thin air seated on top of the coffin carried by the men.  Once again the coffin was dropped and the bearers ran off in fright.
The parson consulted  with the parishioners and at last another six reluctant men were found to bear the coffin.  However, they would only do so on the condition that the parson went before them continuously reciting the Lord’s Prayer until the prepared grave was reached.  This was done and the coffin reached its final destination without further incident.  When they arrived they placed the coffin on the ground and the parson began to give the usual burial service.  To the shock of all the hare materialized on top of the coffin again just as the parson was saying, "I am the resurrection and the life… ."

With those words the hare suddenly changed into a terrifying black terrifying beast with red glowing eyes like coals, and let out the most unearthly and terrifying scream and disappeared into thin air, never to be seen again and so ended the tale of the Witch of Treva.
References and Attributions