Tales of the Lost, the Drowned and the All-Seeing Eye: Vengeance Will Come! 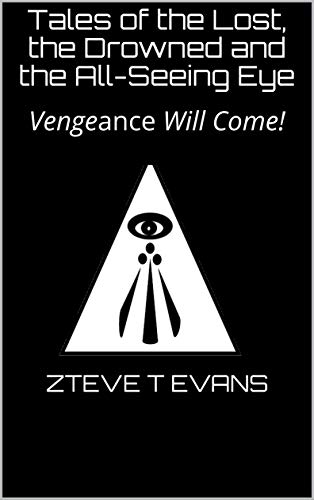 There are many cases in recent times where towns and villages have been deliberately flooded by humans where a change in the landscape was required for purposes such as to form a reservoir for fresh water. These are usually well-documented and their history known though folklore and legends may evolve from them.

All around the world there are also legends of towns, cities and lands that have been destroyed or lost, leaving only rumor and myths of their existence and demise.  Many such places were rich and successful, well established and populous, making their loss all the more tragic and mystifying. These legends often tell of a catastrophic natural event such as a flood caused by high tides, storms or perhaps covered by sand or snow.  Sometimes it is some geological phenomenon such as an earthquake and sometimes this is combined with a natural event or act of war. The loss of such well-established and prosperous places left a deep impression on following generations.  Myths and legends evolved to explain the cataclysmic event and very often these were carefully crafted to provide a warning to following generations of the consequences of breaking God’s laws or their excessive pride or hubris.

These places were very often situated on a site that became transformed by a disastrous natural event in t a new feature of the landscape.  An inland town situated in a valley may be covered by a watery lake.   A town situated by the sea may be flooded and drowned by the waves or covered by sand becoming a massive dune.  A town in the mountains may be covered by snow and ice becoming a glacier. The story created to explain the disaster may be mostly fictional but based on some historic cataclysm like a powerful storm, earthquake or other natural disaster that actually happened.  Sometimes these myths and legends can help archaeologists and scientists investigate real disasters that happened long ago.  In some cases such disasters are well documented from the time but the legends and myths evolve after.

These events when combined with the mysterious origin of some well known feature in the landscape create a compelling story that can have a profound and lingering effect on those it is told to.  Especially when the narrator is a local priest or who uses the story to impress upon their audience the consequences of offending the Almighty.  Although such myths and legends are often designed to uphold Christianity, other religions and philosophies have also used such techniques for this purpose. In some case it is pagan deities or spirits that have been angered in some way by rulers or citizens.  Although warnings may be given they are ignored invoking the wrath of the powerful divinity to wreak some form of divine retribution.

Once divine retribution is invoked the fate of the town is sealed. Often it unfolds as a weather event such a rain, sand or snow storm.  Once divine retribution manifests the end is inevitable. All that will remain will be the myths and legends of a once rich and prosperous society that was drowned, buried or destroyed along with most of its population. Perhaps a lake or some other feature of the landscape appears where the town once stood.

From this a talented storyteller can weave a tale that will work quietly among following generations for centuries that impresses and extols the danger of angering the all powerful deity. In this way a naturally occurring catastrophic event such as a storm or earthquake may be transformed into something altogether more sinister and in many ways more dangerous. Very often it becomes the judgement of God that is dispensing retribution for wrongdoing on an immoral and corrupt society. This and similar themes are quite common in these legends. Warnings of impending retribution and vengeance are offered in an attempt to change people’s behaviour but are ignored. Punishment is inflicted often destroying that society in its entirety not just the perpetrators. Sometimes a few are saved but often the innocent perish along with the guilty.

There is a concept of collective guilt that runs through generations until some chosen time when punishment is enacted. Sometimes vengeance is suspended for several generations and the deviant behaviour forgotten by people.  Sometimes it becomes part of normal behaviour.  Nevertheless, the Almighty works at his own pace and punishment eventually arrives when least expected with devastating consequences. This does seem harsh on those who were not born when the original sin was committed but it seems there is an expectation to strive to recognize and put right the wrongs of the past. The message is that the sins of one, even when committed in the past, must not be tolerated either at the time, or perpetuated in the future. What is sown will eventually be reaped in a time and in a way that suits the Almighty. This obligation to right and discontinue past wrongs does not mean that they be wiped from history or that they should be.  It is important to keep records of such wrongs and our attempts to right them to monitor our own evolution and to make sure we do not make the same mistakes again.

There is a sense that the individual and collective behaviour of people is being watched by some all-seeing eye.  It sees and knows all our deeds and looks into our hearts and minds making judgements upon us. Legends such as these warn that we are always being watched and judged and even our innermost thoughts are known to the Almighty.  They emphasize we must remember and obey the laws of God and will be held answerable for any transgressions at anytime in the present or future no matter how long ago the indiscretion.  Furthermore, we have a collective responsibility that runs through the past, present and future to keep ourselves and others in society on the straight and narrow. The message is the all-seeing eye sees everything and in a manner and time that suits the Almighty we will reap what we sow and then –